If the Kentucky Derby and the Breeders' Cup are my two favorite events on the horse racing calendar, then the start of the Keeneland spring meet every April is a close third.  Nestled just outside of Lexington, Kentucky, Keeneland is one of the more player friendly tracks you'll find in anywhere in the country.  And while some bettors have lamented the arrival of the Polytrack surface and the fundamental change in the way races are run and won at the track, the truth of the matter is Keeneland provides tons of fantastic racing and wagering opportunities on a daily basis.  Additionally, the track offers a excellent handicapping information free to everyone; the data I used throughout this post comes from the Keeneland PolyCapping database, an absolutely fantastic wealth of information provided at Keeneland's official website.  You can find similar race data at the official sites of Turfway Park, Arlington Park, and Del Mar.

Before I get into some of the statistical trends to look out for during the spring meet, let's take a look at the races Keeneland has on their stakes calendar this year:

As usual, the Keeneland stakes schedule is an impressive list for a 15-day meet.  The pinnacle of any Keeneland meet is the Grade 1 Toyota Blue Grass, although that race has become an incredibly difficult race for handicappers since the installation of Polytrack.  The last four winners of the Blue Grass have gone to post at 8/1 (Dominican - 2007), 9/1 (Monba - 2008), 14/1 (General Quarters - 2009), and 40/1 (Stately Victor - 2010).

While the Blue Grass has been an unpredictable race in recent years, the profile of the winners fits into the overall pattern developing at Keeneland with respect to races on the main track.  Generally speaking, while it doesn't appear that a horse needs to have won over a synthetic surface to win at Keeneland, most Polytrack winners have a prior race over a synthetic or grass course prior to winning on the main track.  Below is a chart summarizing the number of Polytrack races at Keeneland since the 2007 spring meet and the breakout of winners based on their racing history:

*Some of the "No Prior Poly/Turf" numbers include First-Time Starters, so keep that in mind.

While we don't have enough data to compare the success or failure of prior surface experience to the total number of starters in each category, I still think the data paints a interesting picture.  Furthermore, there appears to be a pretty stark difference between route and sprint races.  While horses with no poly or turf experience win about 35 to 40% of the sprints on the Polytrack, those same horses only account for about 12% of winners at two-turns.   Remember this information when it comes time for the Toyota Blue Grass, a race that the betting public hasn't figured out in the four years it's been run on the Polytrack.  Any big-name Derby horses that decide to run in the Blue Grass that doesn't have a lick of experience on turf or synthetic surfaces is extremely vulnerable.

An additional note to keep in mind this spring, first-time starters do very, very poorly at two-turns on the main track.  Over the last four years there have been 48 maiden races at two-turns on the Polytrack and only two of those races have been won by a horse making its debut.  And while there probably aren't a ton of horses making their debut at two-turns, it's still worthwhile to keep that information in the back of your mind.

Based on those categories, the distribution of winning horses at Keeneland spring meets since the introduction of Polytrack breaks down in the following manner:

If we were to graph those results, we get the following picture: 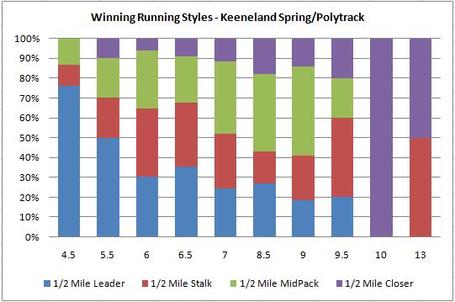 The 4 ½ furlong baby races, which I included since it is part of the whole picture, really don't tell us anything about the track since it stands to reason that the horse in the lead with a ½ furlong to go will win an overwhelming amount of time.  Additionally, most of these races are contested by horses making their first lifetime start, so they are pretty much trainer/pedigree affairs as opposed to races determined by running style.

I don't think there is anything particularly shocking with any of the above data - as races get longer, speed becomes less and less of an asset.  That's not a revelation at Keeneland any more than it's a revelation at other tracks around North America.  At the same time, while it's not impossible to win on the lead in two-turn races, it's about as common as a horse winning from 5+ lengths back at the half-mile mark.

Looking closely at those numbers, it's difficult to make the case that speed can't win on the Keeneland Polytrack.  Undoubtedly, the data is starkly different than the old dirt surface and the extremely biased rail that helped to push many horses to wire-to-wire victories.  But the track, in my view, is quite fair.  A race distance where 25 to 30% of the winners come from the front seems about right to me, at least from a high-level perspective.

There continues to be the question as to what kind of value we should apply to results at Keeneland in evaluating horses coming out of these races to other tracks and surfaces, both dirt and synthetic.  Specifically, much has been written about the Blue Grass and its importance on the Kentucky Derby trail.  While it can't be denied that the race has taken on a chaotic nature in recent years, I'm not sure that it's any less or more important of a race than it was on the old dirt surface.  Paddy O'Prado and First Dude finished 2nd and 3rd last year.  Derby winner Street Sense finished 2nd in 2007.  We are still waiting for our first Blue Grass/Derby winner in the Polytrack "era", but the race is still producing horses that run well in both events.  And the old Keeneland dirt track wasn't churning out a ton of Blue Grass/Derby winners in it's day; the last horse to win the Blue Grass and go on to win the Kentucky Derby was Strike The Gold in 1991.

Looking at the turf races from past spring meets, below is a snap-shot of the running style of winning horses using the same categories as above for the Polytrack: 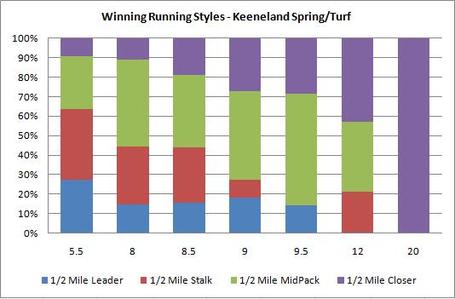 About the only truly surprising revelation from this data is the lack of success of speed in 5.5 furlongs sprints.  While 27% is a healthy percentage of winners, we need to remember that this data represents where the winner is at after ½ mile, meaning over 70% of the time in 5 ½ furlong turf sprints the leader with just  1 ½ furlongs to go doesn't win.  I don't know how that relates to other tracks around the country, but I would have pegged the success rate at a much higher level if I were to have taken a guess beforehand.

This data, when contrasted with the Polytrack data, indicates that speed is at an even greater disadvantage on the lawn when running two-turns.  While the ½ leader wins about 20 to 27% of the time on the main track, on the lawn that number drops into the teens, and none of the route distances showing much kindness to horses on the lead.

In many ways, handicapping races at Keeneland (both turf and poly) is not terribly different than handicapping at other tracks around the country, but the track does demand that the player recognize strong tendencies and patterns with respect to prior form and running styles.  Like any track, there are days when speed does well and days where it's impossible to win up front.  And in the big picture, the crowd favorite still wins at a healthy clip (29%) during the spring.