Share All sharing options for: PREAKNESS 2011: Preview and Picks

(Note: I was planning on a Preakness undercard post going up today, but that will probably not happen until early tomorrow morning.)

As soon as a horse crosses the wire as the winner of the Kentucky Derby, the question of "can this colt win the Triple Crown?" is put forth. Over the last 32 years, that question has been answered in the negative. On Saturday afternoon, Animal Kingdom will attempt to become the twelfth horse since 1978 to pull the Derby/Preakness double, and in the process, take one step closer to ending the Triple Crown drought.

The Preakness Stakes is run at a mile and three-sixteenths distance, one-sixteenth of a mile (or 110 yards) shorter than the Kentucky Derby. The perceived challenge of the Preakness isn't so much the distance, but the fact that horses that ran in the Derby have just two weeks to rest up before wheeling back for the second leg of the Triple Crown. While this seems like a daunting task, the reality is a bit different. Over the last quarter of a century, horses that ran in the Derby have done exceptionally well in the Preakness, and the Kentucky Derby winner has finished in the top three at Pimlico 75% of the time (18-for-24, nine wins).

Below is a look at the field for the Preakness, along with betting selections.

1-Astrology (15/1): Hasn't won a race since Oct. 31st of 2010, when he scored in the G2-Iroquois at Churchill Downs. His last two efforts were decent (2nd in both the G2-Jerome and G3-Sunland Derby). The 2nd by Adios Charlie to Alternation in last weekend's Peter Pan Stakes certain flatters him since Adios Charlie beat Astrology in the Jerome). If Astrology wants to stay close to the lead in the Preakness, like he has in all of this other races, he can't have a poor break or a sluggish beginning. With the speedy Flashpoint to his outside (as well as Shackleford and Norman Asbjornson), he doesn't have a lot of room for error in the early going.

2-Norman Asbjornson (30/1): He faded a bit in the final furlong of the G1-Wood Memorial when he was challenging Uncle Mo and Toby's Corner for the top spot. Prior to that he ran second in the Gotham to Stay Thirsty (just ahead of Toby's Corner), in probably his best race of the year. With the exception of the Wood, Norman generally finds himself a length off the pace in the early stages. When you considering all the speed that is around him today, jockey Julian Pimentel may decide to sit a bit further back than he has in previous races. This colt hasn't shown a tremendous burst of late speed in any of his races but he seems to fit the profile of a "grinder" that will always put himself in the mix in the final furlongs.

3-King Congie (30/1): Finished 3rd in the G1-Blue Grass Stakes on Polytrack after three straight wins over the lawn at Gulfstream, Calder and Aqueduct. His two attempts on dirt at the beginning of his career were, to put it kindly, awful. It's possible that's he found some sudden preference for dirt since then (or that he just wanted to go longer on the main track), but it's also just as likely that he's at his best on turf or synthetic surfaces. Unlike Animal Kingdom in the Derby, King Congie has already tried dirt and run poorly over it.

4-Flashpoint (20/1): This colt won impressively in the first two starts of his career, including a huge 7 ½ length score in the G2-Hutcheson Stakes at Gulfstream Park on Feb. 26th. Former trainer Richard Dutrow gave him a shot in the G1-Florida Derby where they tried to rate his sprinter's speed in the early stages, a tactic that saw him run a ho-hum 4th, beaten 8 lengths. Wesley Ward is now in charge, and perhaps he's been able to teach Flashpoint to rate over the past two months. If he hasn't, this colt has only one way to win - gun it to the front and take them all the way.

5-Shackleford (12/1): Over the six races of his career, Shackleford has run well four times, with only two efforts that could be considered clunkers. The two poor efforts were both races where he wasn't up running on the lead (or within a ½ length of the lead) in the early stages. With Flashpoint to his inside, it would seem imperative that Shackelford is at least right on the early leader's hip pocket going into the first turn. If he's not, he's yet to show that he can run at his best if he's more than a length or two back early on.

6-Sway Away (15/1): When he closed hard to finish ¾ of a length behind The Factor in the G2-San Vicente he became an intriguing horse to follow as he stretched out in distance. After failing to mount any sort of sustained drive in either the G2-Rebel or G1-Arkansas Derby (he briefly led the Ark. Derby before fading late) you get the sense that this colt is better suited for sprint races. His final splits in both of his Arkansas races were 13.71 and 31.13...not really what you want to see in a closer.

7-Midnight Interlude (15/1): He had absolutely no excuse in the Derby after sitting in a good position early on and then coming up with nothing in the final stretch drive. Trainer Bob Baffert suggested that the big crowd got to him before the race but it seems more likely that his Santa Anita Derby win took a bit more out of him than we thought. I'm not sure if he's ready to come back and put up a huge performance after that Derby run.

8-Dance City (12/1): Finished 3rd in what has turned out to be one of the best prep races of the spring, the Arkansas Derby. Drawn outside most of the other speed, Dance City and Ramon Dominguez will have a lot of options as the field heads into the first turn, and they should be able to secure a nice, clean stalking trip around the course. It's not crazy to think this colt could have a shot at a big effort as he comes in with excellent form.

9-Mucho Macho Man (6/1): Ran big to finish 3rd in the Derby and he appears to be training well heading into his fifth start of 2011. Prior to the Derby, Mucho Macho Man ran right off the lead in almost all of his starts, but at Churchill he was shuffled back to 8th in the early stages, about 4 ½ lengths from the front. By running a strong race from a spot where he doesn't usually find himself, Mucho Macho Man showed a bit of versatility in his running style, something that makes him an attractive contender in this spot. Trainer Kathy Ritvo had him geared up for a good run in the Derby, something he needs to build off of in this spot. Perhaps the only concern comes from the pedigree side and the manner in which the Derby was run. His pedigree is all sprint, which makes me wonder: was he able to outrun his pedigree in the Derby because of the slow early pace? And if so, what will happen if he faces a lot stronger pace in the Preakness?

10-Dialed In (9/2): The philosophy is pretty simple for Dialed In on Saturday: take back (but not too far) and start making a run into the final turn. That's exactly what he did in the Derby where he was compromised by a slow pace and by being way too far back early on. If he's 10 lengths back in the early part of the Preakness, he'll probably be okay. If he's once again 15+ back, that will be a problem.

11-Animal Kingdom (2/1): Odds-wise, this horse is probably going to be overbet, relative to his actual chances of winning. That doesn't mean that he isn't a deserving favorite - he certainly is. But 2/1 odds suggest that he has a 33% chance of winning. I don't know that I'd put it that high. 5/2 to 3/1 (28% to 25%) seems a bit better given the question marks that still remain with this horse. His Derby wasn't a fluke, but was it the result of a career best performance or was it the result of a horse that is simply better on dirt? We'll find out on Saturday.

12-Isn't He Perfect (30/1): It's hard to find much to get excited about with this colt. He has tried graded stakes company three times and never finished higher than 5th, and his last win came in a $50,000 starter allowance race on the inner dirt at Aqueduct. Eh...seems severely outclassed in this spot.

13-Concealed Identity (30/1): He loves Pimlico (2-2-0-0 lifetime), so if you're looking for a reason to play a bomb in this race, Concealed Identity might be it. This colt won the Tesio at Pimlico last time out, the second of consecutive victories at the track after he shipped in from Laurel in late March. Concealed Identity is Maryland-bred, Maryland-trained, and Maryland-raced; this is your local horse.

14-Mr. Commons (20/1): His effort in the Santa Anita Derby on April 9th was decent (3rd, beaten 2 ¼ lengths) but he kind of hit the wall in the final furlong making me wonder if he really wants more ground. Trainer John Shirreffs is one of the best around with graded stakes runners - 40-for-123, 33%, 63% In-The-Money, $2.67 $2 ROI over the last five years - so you have to take any runner out of his barn seriously in these types of races. Check out those numbers again - 63% of all his stakes runners in the last five years have finished in the money...very, very impressive. Mr. Commons is enticing for trifecta and superfecta wagers.

There is no way I can take 2/1 on Animal Kingdom for a win bet in this spot. If his odds were to drift up to 5/2 or 3/1, I might be inclined to take a shot. I'm trying to find something a bit better price-wise.

Dialed In should find things a bit more to his liking at Pimlico than at Churchill. A clean break is essential, as is more speed on the front end to soften things up in the final quarter mile. Dialed In's 9/2 morning line odds are decent, but I'd really like to see 5/1 or better. If Shackleford gets bet down from his ridiculous 12/1 morning line price (which I think he will), then there's a chance Dialed In will drift up on the tote board. Or he may just get hammered by the crowd. You never know.

In terms of price plays, Norman Asbjornson and Mr. Commons appear to me to be the long-odds colts with the best chance to make a bit of noise in the exotic wagers.

I'll probably go with a two-pronged strategy for a trifecta/exacta wager in this race: one play will have Dialed In on top, with Norman Asbjornson, Dance City, Mr. Commons, Animal Kingdom and Mucho Macho Man in the 2nd and 3rd spots. The second prong will depend on how the board is treating Animal Kingdom; if he drifts up enough in price (or the "will pays" suggest some value to be found), I'll play a ticket with the Derby winner over Norman Asbjornson and Mr. Commons, and maybe Dance City. 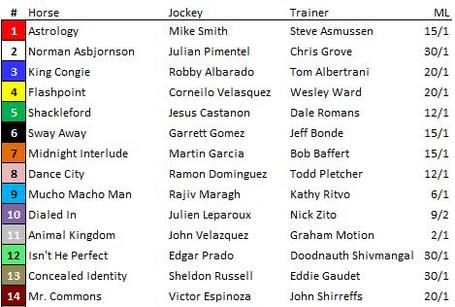