Dialed In, winner of the Florida Derby at Gulfstream Park, was made the morning line favorite for Saturday's Kentucky Derby at Churchill Downs after drawing post position #8 this afternoon. Twenty horses drew into this year's Derby including juvenile champion Uncle Mo, who ended up in post position #18 and morning line odds of 9/2.

Archarcharch, winner of the Arkansas Derby, drew the dubious #1 post position, a spot that single handedly doomed Lookin At Lucky in last year's Derby. Archarcharch is 10/1 on the morning line.

Below are the entries, post positions, and odds for the 2011 Kentucky Derby 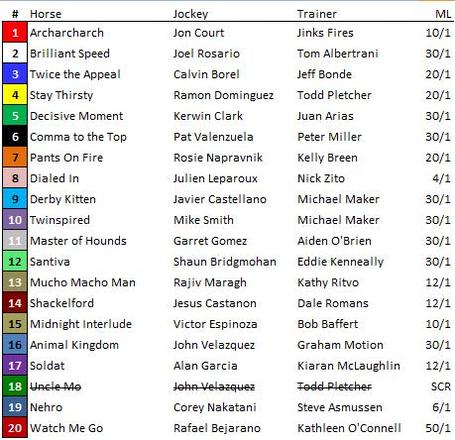 Some thoughts on the draw: