Share All sharing options for: EPSOM DERBY 2011: A Favorite for the Queen?

One of the oldest and most prestigious events in the world of horse racing will take place on Saturday when the Epsom Derby (Investec Derby) is run at Epsom Downs in England.  Since the inaugural race in 1780 (won by Diomed), the Epsom Derby has taken place every single year, including the time during the First and Second World Wars (1915-1918 and 1940-1945) when the race was held at Newmarket.

The Epsom Derby is scheduled to air (tentatively) on both HRTV and TVG in the U.S.  Post time is 4:00pm in the U.K. (11:00am Eastern/8:00am Pacific). HRTV will also televise Friday's card featuring the G1-Epsom Oaks, G1-Coronation Cup, and G3-Diomed Stakes. For more information on the Derby, and the entire Derby Festival, the Racing Post has an excellent mini-site providing wall-to-wall coverage. (Link: Derby Meeting)

The current going report for the Derby course is "GOOD" with the course expected to receive 2-3 mm of water today or tomorrow.

The ante-post betting favorite for the Derby, Carlton House (owned by the Queen), scored a victory in his only start of 2011 in the Group 2 Dante Stakes at York over Seville (GER) and Pisco Sour. The colt suffered a minor injury during training earlier this week and his status for the race will not be confirmed until Friday. Trained by Sir Michael Stoute, Carlton House was bred in Kentucky and is a son of Street Cry (IRE) out of a Bustino (GB) mare (Talented (GB)).

The one (and only) reigning British monarch to win an Epsom Derby is King Edward VII, who leased the winner of the 1909 Derby, Minoru.

Andrew Fabre's Pour Moi (IRE), winner of the Group 2 Prix Greffulhe at Saint-Cloud on May 7th, is a strong 2nd choice with early bettors.  In addition to his win at Saint-Cloud, Pour Moi won the listed Prix Des Feuillants at Longchamp last October, and was 3rd in the Group 3 Prix La Force in his 2011 debut on April 10th.

Third choice in the ante-post wagering is the Aiden O'Brien trained Recital (FR).  A son of Montjeu (IRE) out of a Kendor (FR) mare (Dibenoise (FR), Recital sports a solid 4-3-0-1 record and wins in the Group 2 Derby Trial Stakes at Leopardstown and the Group 1 Criterium de Saint-Cloud at Saint-Cloud last November.

Below are the horses in contention for the 2011 Epsom Derby, along with their approximate best odds with U.K. bookmakers.

Epsom Downs and the Derby

Epsom Downs is a "C" shaped racecourse with all races, except those at five furlongs, running around a large turn. The mile and a half Epsom Derby begins at the very tip of the course on the far side, while races run at ten and eight furlongs begin along the same straight portion of the course.  Races at seven and six furlongs start out of the chutes at the top of turn.

Races at five furlongs are run on the straight downhill course, considered one of the fastest five furlong courses in the world. 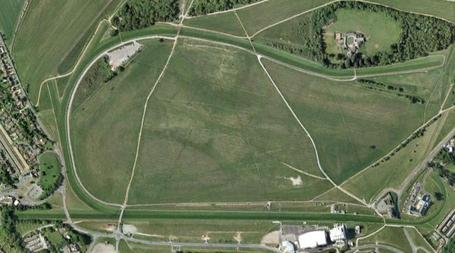 The Derby begins at the lowest point of the Epsom Downs course and proceeds uphill for approximately four to five furlongs.  When the horses reach the highest point of the course (roughly 150 feet above the lowest point), the ground levels for a brief period of time before heading into the famous Tattenham Corner and the downhill sprint for the final four furlongs (see photos below).  With approximately a half a furlong to go, the course takes another twist and begins an uphill climb to the wire.

Despite the final uphill climb and the stamina it takes to stay on till that point, the winning move will most likely come as the field rolls off Tattenham Corner and engages in the sprint downhill towards the wire.  The horse that is able to separate from the pack during this portion of the race will likely have a tactical advantage on the rest of the field during the final stages. 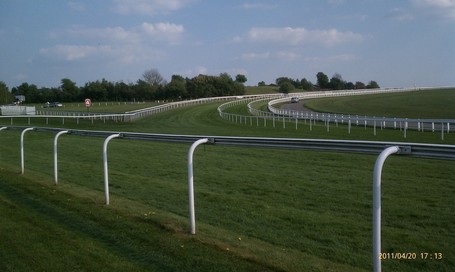 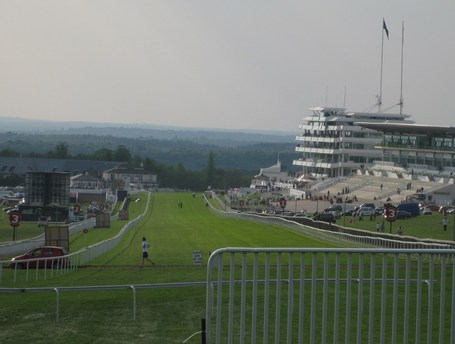 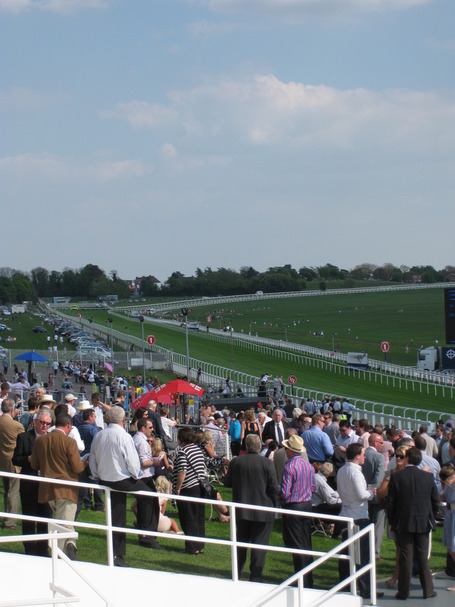