Sunday's Queen's Plate at Woodbine might not carry a grade alongside its name, but it does have a $1,000,000 (Canadian) purse and a huge field of 17 three-year-old Canadian-breds going 10 furlongs on the main Polytrack. The Queen's Plate, first contested in 1860 and the longest continuously run stakes race in North America, will take place for the 152nd time on Sunday (post time 5:38 Eastern).

The field for the 2011 Queen's Plate is led by 3/1 morning line favorite Check Your Soul.  A son of Perfect Soul (IRE) out of an Unbridled mare (Unchecked), Check Your Soul was an impressive winner of the Queen's Plate Trial after breaking in the air at the start.  He easily beat several of today's challengers (Bowman's Causeway, Strike Oil, Hippolytus, and Imhotep) en route to a 3 1/4 length win.

The second choice on the morning line is the the aptly named Queen'splatekitten at odds of 7/2.  A son of (surprise, surprise) Kitten's Joy, Queen'splatekitten was 7th in G1-Blue Grass Stakes in April before winning the listed Marine Stakes at Woodbine on May 21st.  Queen'splatekitten is trained by Todd Pletcher and will be ridden by John Velazquez.

The Queen's Plate isn't the only good betting race on the Woodbine card on Sunday as the track will offer 12 races on Sunday, seven on which have ten or more starters.  Additionally, there are two graded races - Grade 2 Highlander Stakes (Race 5) and the Grade 3 Singspiel Stakes (Race 7) - both of which will take place on the lawn.

Below are the entries, post positions and morning line odds for Sunday's Queen's Plate at Woodbine. 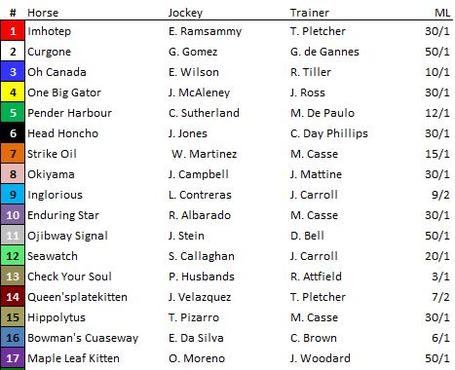