ORIGINAL POST: The post position draw for the 2011 Belmont Stakes will take place at 11am Eastern on Wednesday, June 8th.  The draw will be televised live on the MSG Network and streamed live on BelmontStakes.com. (The draw is also scheduled to air on HRTV.)  If you are unable to follow along on either of those mediums, I'll also have a live blog of the events.

UPDATED: The results of the draw, along with the morning line odds, are summarized below. 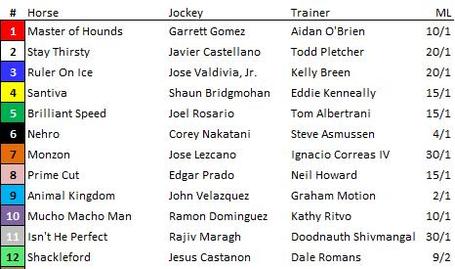 Thoughts on the draw: