Share All sharing options for: LONGACRES MILE 2011: A Day at Emerald Downs

AUBURN, WA - Given the typical state of weather in the Pacific Northwest, a horse racing fan couldn't have asked for a better day at Emerald Downs for this year's Longacres Mile.  Temperatures climbed above 80 degrees on the afternoon, Mt. Rainier loomed boldly in the distance behind the clubhouse turn, and an eight-year-old gelding, Awesome Gem, capped off a successful day with a win in the Grade 3 Longacres Mile. (Video Replay)

A field of12 for the Mile was reduced to 11 after the scratch of Hastings shipper St. Liams Halo due to heat in his right front foot.  The scratch re-adjusted the post positions for the Mile, moving defending champion Noosa Beach in one slot from 11 to 10, and Awesome Gem moved from the 12 position to the 11. Prior to this year's race, the 11-hole was 1-for-41 all-time in the Mile; the 10 post was 6-for-56. 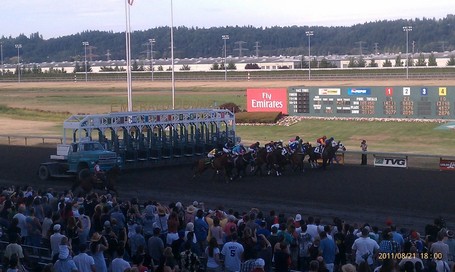 Awesome Gem reversed his fortunes from the 2009 Mile when he was a tough-luck 2nd to Assessment after sitting 15 lengths back in the early stages and coming six-wide into the stretch.  This year, the trip proved to be much easier.  Awesome Gem broke well from the gate and settled into position in the middle of the pack, no more than five or six lengths behind leader Noosa Beach.  As the field rolled off the turn into the stretch, jockey David Flores and Awesome Gem easily moved up to challenge the leader.  From there, Awesome Gem clicked off a final quarter mile of 24.07 on his way to winning the Mile by 1 ½ lengths at the wire.

At the end of the day, Noosa Beach had too much to overcome in order to hold off a horse with the class of Awesome Gem.  More than being the high-weight horse, or being drawn to the outside of the gate, Noosa Beach's biggest hurdle was attempting to take the Mile from gate-to-wire.  In his previous races, Noosa has been able to sit just on or off of the early lead, giving jockey Gallyn Mitchell more options as to how the race would be run.  On Sunday, Noosa had to do all the dirty work himself on the front end, setting a solid six furlong split of 1:10+, with internal splits of 23.95, 22.67 and 23.75.  If there was a quarter-mile of the race that could have reversed Noosa Beach's fortunes, it was likely the run to the ½ mile pole when he went 22.67.  A 23+ quarter in that point of the race may have allowed him to conserve enough energy to hold off Awesome Gem in the stretch. But as it turned out, the California shipper was too much to overcome. 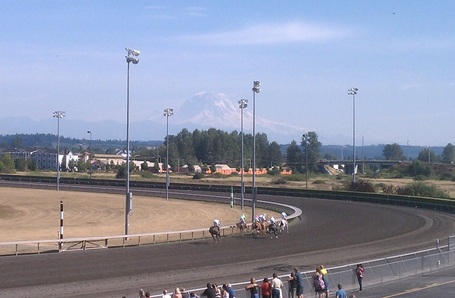 -Following the Mile, Emerald Downs founder and President Ron Crockett announced that handle for the 2011 Mile card ($3,250,016) was an all-time high in the 16 years since the track opened. The previous high occurred in 2007 ($3,191,831) prior to the start of the current recession and the onslaught of difficult times for many small tracks around the country.  The record Mile day handle, when combined with the overall strength of the current meeting (handle up 1.5%; attendance up 11.5%), paints a much better picture of thoroughbred racing in the Pacific Northwest.  Let's hope that continues through the rest of the 2011 meet and into this year's sales and next year's meeting.

Here's a look at the splits and payouts of the Sunday card at Emerald Downs: