Since the Yearling Sale is maybe the best off track indicator of the strength of the sport, I wanted to take a quick look into the specifics of the sale to see if any trends could be identified. I picked up on three things immediately: 1- Medaglia d'Oro is being bred to for near 100% commercial reasons; 2- the public loves Hard Spun even though he's only a Freshman Sire; and 3- buyers really like Big Brown and Curlin, despite the fact that neither has had a runner since their oldest crop are yearlings in 2011.

There hasn't been a full sale summary article published from Bloodhorse or Thoroughbred Times, that I've found, as of yet. But I'll link to them once they're posted either late Saturday or early Sunday. (And Bloodhorse posted theirs before I was done writing. I should've waiting a hour to start the article). 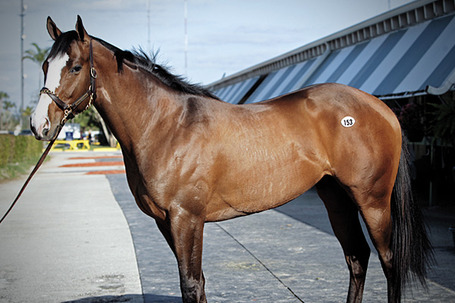 via media.cnbc.com - Green Monkey - While not a graduate of the Keenelnd Yearling Sale , he is the most expensive horse ever sold at auction at a cool $16 million. And the biggest flop ever as he made three starts as a three-year-old, finishing third once and fourth twice. The Todd Pletcher trainee earned $10,440.

Huge increases across the board when we're talking dollars and cents. Fewer horses, but that's to be expected with the economy. It costs quite a bit of money to prep a horse for the sale, and if money's really, a farm owner/breeder could be expected to hold onto a horse.

So onto Medaglia d'Oro (MdO from hereafter). He has 157 yearlings this year. 62, yes, 62 of them were sold at Keeneland. A total of 76 have been sold thus far. Over HALF of his foals have SOLD at auction, so that doesn't even include the RNAs and Outs from the various yearling sales. So you have to guess that 80(?)% of his foals were destined for the auction block from day one. I'm usually wary of stallions whose progeny tend to be 100% auction oriented (meaning you're looking to maximize theoretical genetic potential over getting a good racehorse, but these breeding strategies are not necessarily mutually exclusive, they just have difference foci), since a lot of that is based on Nicking, family crosses, and things like that that don't directly correlate to getting a really good cross. (From my soapbox, I think the one thing that the computers don't take into account is size. Breeding a small mare with a huge stallion isn't the best idea, but that's an entirely new story, not something to be addressed here). MdO should be hot, Rachel Alexandra is one of the best horses of the past 15 years. But he seems to be that commercial golden boy right now.

I discussed Hard Spun here earlier here. But clearly the public loves him. Hard Spun has 100 yearlings, 48 of which were offered at Keeneland. 69 have been offered in total in all of the auctions. Now I'm not as surprised at this ratio as I am about the MdO ration of foals/hips. This crop of yearlings was bred before Hard Spun had any runners. Therefore it is completely rational to expect breeders to push their foals by Hard Spun towards the auction once his 2yo crop has had as much success as it has seen thus far. So not only do his fillies and colts put out on the track once they get there, his foals are valued highly on the auction block as well.

Now the question of Big Brown and Curlin is an interesting one. Curlin is the best race horse of our generation (since it is impossible to top Secretariat in any discussion, I'll leave it at that) and it is obviously understandable why so many of his foals are being sold without any runners yet. I'll let him be. But Big Brown is an interesting case. He has 77 foals that are yearling. 54 have been offered at auction (23 at Keeneland). He has a nice female family, but nothing that touches most of the foals of the select portion of the Keeneland Yearling sale this year. But despite that, his foals went for an average of $85,000+ this year in Lexington. The hype surrounding his failed quest for a Triple Crown must have followed him to Three Chimneys. I just don't see the value there. Now that I've said that, he'll probably be the next Mr. Prospector, and I'll wish I'd bred to him when he had a cheap stud fee of $40,000.

Now in all honesty, I really wanted to look at the sale by family and figure which familial crosses yielded the highest average/median price, which ones yielded the best results at the track, and which ones seemed to be commercial "Green Monkeys" so to speak (meaning high commercial value with minimal successes at the track). However, I failed everyone reading this since I don't have access to any databases or programs that let me look at that much data across the entire sale (and for 4-6 past generations). So instead I had to settle for what I've written above. If anyone knows where I can get access to that data, please let me know. Else, I just can't do it all by hand and trace the cornerstone families to their progeny's success when crossed with other cornerstone families. That would take weeks, and it would be awesome (and would generate an amazing spreadsheet for me to marvel at) but I just can't do it. So for my laziness, I'm sorry.