A quick look at the latest retirement announcements and the prospects going forward.

I've been delinquent in my duties here recently. So to make amends for my transgression, I am going to look at the latest retirements/announcements of four stallion prospects and one broodmare prospect.

Continuing the rash of 3 year old retirements is Gemologist. He is joined by announcements for a trio of four year old horses: The Factor, Caleb's Posse, and Stay Thirsty. Additionally, Winter Memories, a millionaire mare on the turf, was retired as well.

Gemologist, the hottest thing smokin' coming into the Derby, never showed winning form after his disastrous 16th place finish while running for the Roses. Tiznow is currently the #12 ranked sire known for producing large, handsome progeny. He has a very good production record, with 6% stakes winners (37 of 671 foals). Impressively, he currently sits at 12th on the General Sires List with just over $5,600,000 in earnings with his highest earner being Gemologist at $649,000. He has sired winners of the Dubai World Cup (G1), Breeders’ Cup Juvenile
Fillies (G1), Met Mile (G1), Travers (G1), Belmont (G1), Matron (G1), Santa Anita Derby (G1),
Ruffian (G1), Whitney (G1), Lady’s Secret (G1), Carter (G1), and Goodwood (G1). That's impressive. Currently, he has two sons at stud: Colonel John and Tiz Wonderful. Tiz Wonderful is representing himself well as he is currently 10th on the Freshman Sires List.

Crystal Shard (Mr Prospector) is unraced. However, two of Gemologist's siblings are black-type runners, with a listed stakes win and a listed stakes show between the two. Definitely a quality producer. (I don't need to elaborate one the Mr. Prospector influence). Gemologist's second dam is Sulemeif, a G3 winner of the Suwannee River Handicap at 10 furlongs on the turf. She had three black-type winners, including Withallprobability, who won the Bonnie Miss S.-G2 and Forward Gal Breeders' Cup S.-G2 and placed in the Kentucky Oaks. She is a producer herself of stakes horses. Definitely a very solid female family.

Gemologist showed the ability to go classic distances, has the pedigree to back it up, and comes from a female family riddled with black type. Can't ask for much more than that. He will stand at Winstar Farms. 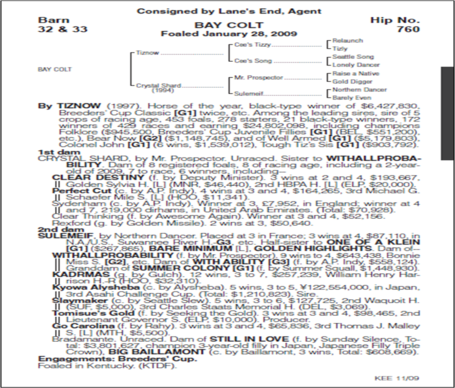 The Factor proved himself to be a quality sprinter capable of covering 7 furlongs in lightning fast times. He was on the path towards to the Kentucky Derby before being sidelined with a slight injury, but came back strong with two more graded stakes victories in his 3 year old campaign. He ended his racing career with two 2nds in G2 6f stakes over synthetic surfaces. He is by War Front who is by Danzig, an incredible sire of sires with successful stallions such as all-time great Danehill, second crop superstar Hard Spun, and productive Langfuhr, amongst others. War Front has the pedigree of a champion sire. War Front's damsire, Miswaki, is from the Mister Prospector line. Summarily: War Front has the pedigree of a champion stallion.

Greyciousness (Miswaki) is lightly raced. She only has one other foal of note, a $100k winner. More important is The Factor's second dam, Skatingonthinice. She is a listed stakes winner at Canterbury at 8.5 furlongs. Her best foal, Chief Seattle, was second in the Breeders' Cup Juvenile. He was a sire in Indiana before he passed in November of 2011.

The Factor left no doubt as to his raw abilities to get a distance under a mile very quickly. But a lack of depth of talent in his female family leaves a little bit to be desired. He will stand at Lane's End. 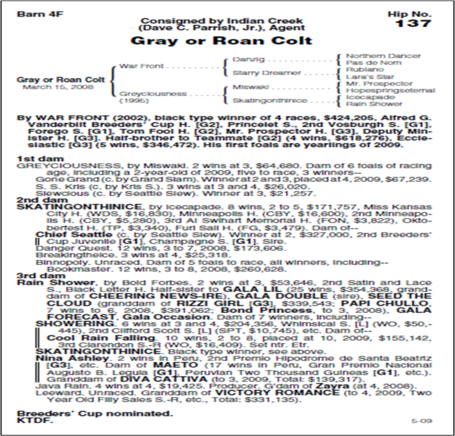 Caleb's Posse, a Breeders' Cup Dirt Mile Champion, showed as much ability going 8 furlongs as any horse in the country. A distance that perfectly suited him, he was very consistent when running between 7 and 8.5 furlongs no matter what his competition was. Posse, a NY based stallion, has shown the ability to sire some quality sprinters. Kodiak Kowboy (currently standing at Vinery-Lexington) is by Posse as well, and he was well suited at 6-7 furlongs and won $1.6 million lifetime. Kodiak Kowboy's first foals are yearlings this year. Posse also produces nice 2yos, such as Rolling Fog, the colt who just won the Del Mar Futurity at 7 furlongs.

Abbey's Missy (Slewacide) never won a race. Her only other foal is a $5,000 claimer. Caleb's Posse's second dam is Abbeys Phone (Phone Trick). She did win one race lifetime. She has one ungraded stakes placed foal, Silver Phone. His third dam is Dusty Donna (Dust Commander). Her best foal is Mr. Ross, a multiple G3 winner of $1 million. A solid, but not a great family.

Caleb's Posse has the potential of being a quality 8 furlongs and under sire. Not sure how high his ceiling is though. He will stand at Robert Clay's (Go Tribe!) Three Chimneys this season.

Stay Thirsty seems to have grown up at the exact right time to seize on the relative weakness of the 2008 foal crop. Once exposed to open company, he was never able to regain his winning form. Regardless, he is a winner of a G1, G2, and G3 race for a total of $1.7 million. His sire, Bernardini, is one of the elite sires currently at stud. His $150,000 stud fee reflects that as well. He is the sire of Alpha, Algorithms, To Honor and Serve, and Wilburn. A son of AP Indy, Bernardini has shown himself to be a fantastic sire, but has yet to have a son at stud.

Marozia (Storm Bird) won one race, but her strength is her record of production. In addition to Stay Thirsty, she has two other stakes horses, Andromeda's Hero (won G3-Fred Hooper; 2nd Belmont Stakes) and Superfly (3rd G1-Champagne). Superfly is a low level stallion that stands in Kentucky for $1,000. His second dam is Make Change (Roberto). She ran second in 5 G1 races. Her best foal is Time Changes, who won the Prix Isola Bella in France. His third dam is Equal Change (Arts and Letters). She placed in the G1-CCA Oaks. Most importantly she is the half sister to three very good stakes horses (a G1 miler in Ireland; a Vosburgh winner; 3rd in the CCA Oaks). A very solid female family.

Stay Thirsty looks to have the makings of a very good stallion. He will be the first of Bernardini's sons to enter the breeding shed and looks to pass the tests. His female family shows high end production as well as a wide array of winners. He will stand at Coolmore's Ashford in Lexington, Kentucky. 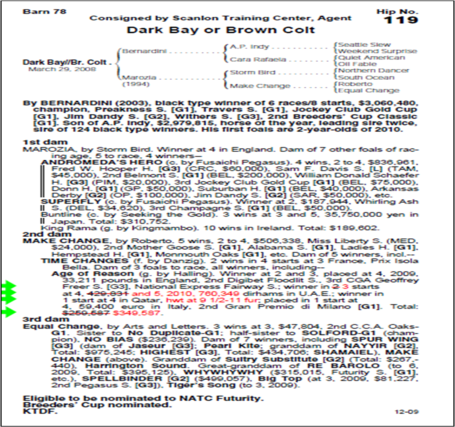 And onto our broodmare prospect:

If there is a definitively better race mare on turf at the classic distances in North America than Winter Memories, then I'm missing something. She won seven graded stakes on the grass, including 2 Grade 1 events for a total of over $1,200,000. By El Prado, she showed her European roots by dominating her peers on the turf. El Prado, who died in 2009, is the sire of stallions Medaglia d'Oro, Paddy O'Prado, Artie Schiller, and Kitten's Joy. As a Broodmare Sire from the lineage of the great Sadlers Wells, he is currently 35th on the Broodmare Sire rankings. His pedigree is fantastic and he has shown the ability to pass on his quality to his progeny.

Memories of Silver (Silver Hawk) is herself a two-time G1 winner of over $1.4 million at classic distances on the turf. Her progeny include 3 black-type horses, one of which was sold to John Ferguson for $2.4 million in September of 2001. Her second dam is All My Memories (Little Current). While only a winner of one race, she produced 3 black type runners in addition to Memories of Silver. All three were placed in stakes races, with one in Ireland, one in Japan, and one winning the Miss Grillo Stakes.

Not much else you could possible ask for from a broodmare prospect. She owned by the Phillips Racing Partnership and will retired to broodmare duties at Darby Dan, which is owned by John Phillips.

As always, racing information from Equibase.com and pedigree information is from Pedigreequery.com.