The "curse" of a Breeders' Cup Juvenile Winner isn't a curse at all. Two year old graded stakes victories don't really mean that much in the long term and there are far too many of them. Why does the division need any Grade 1 races outside of the Breeders' Cup?

While watching the Saratoga meet, it really struck home with me that there are a ton of 2 year old stakes run from August through November. But was that an accurate portrait or was I just taking note of it since I was mostly losing my shirt? And furthermore, are they really indicative of talent? Basically, do they matter down the road?

So after combing through the (now defunct) Thoroughbred Times.com calendar of all stakes (and most importantly, refining my comma-delineated data Excel skills[z?]) I pulled the total number of graded stakes events for all 2 year olds. En total, there are 24 graded stakes restricted to 2 year olds: 9 G1s; 6 G2s; and 9 G3s. That is over a period of just 4 months of the real racing season for 2yos, which opens at Saratoga in August and basically closes with the end of the Breeders' Cup in November. As a reference, there are 76 open(ish) Grade 1 races for 11ish months of racing (including filly and mare stakes but excluding the 3yo stakes). **Note:"ish"es are needed here, since I'm not 100% confident in the roll up of numbers based on the sheer amount of data concerning worldwide stakes I had to sort through.**

I needed a sampling to look at success from the 2yo stakes calendar and see how it applied going forward for the colts/fillies. What better place to look that to the Juvenile and Juvenile Fillies races of the Breeders' Cup! I also used the non-BC Juvenile winners of the Champagne and Del Mar Futurity for the past 5 or so years. The table below lays out the past winners of each race and their accomplishments post 2yo year (click to embiggen): 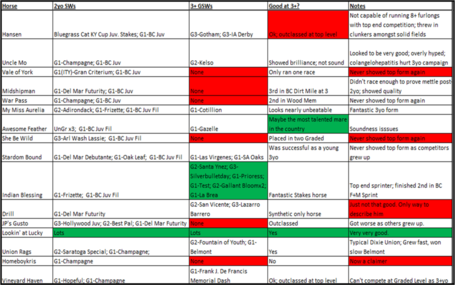 Of all of the winners of the listed races, you really see four very good horses: My Miss Aurelia, Awesome Feather, Indian Blessing, and Lookin' at Lucky. Others had soundness issues (Uncle Mo). But most just couldn't cut it come spring of their 3 year old year. I may be cherry picking a bit, but not on purpose. I figured how this would look prior to researching it, but I did not know the specifics.

There is a demand for two year old races, for sure. With that demand comes a structure of graded races to encourage competition and quality. But I have two issues with this: 1- Does a two year old race that is not indicative of talent or of any real ability really justify a G1 ranking? and 2- How can you have a graded race when you have horses with one and two lifetime starts competing to win a Grade 1 race? That seems excessive to me.

Capping the grade for two year olds at Grade 2 would serve the purposes of promoting the division, but not give a Grade 1 status to a race that might have 12 starters but only a combined 20 starts amongst them. Now the BC Juvenile certainly deserves the G1 tag, as it is the championship for the division. But why give away a G1 to horses that really have proven nothing other than mostly being older than their peers. Homeboykris is a great example: he cleaned up the 2 year old division and while he raced for several years afterwards, never sniffed a stakes race again. While he is not the rule, he is certainly not the exception.

Let's reward success and not a mere confluence of circumstances that include (and is heavily influenced by) what day the colt/filly was foaled.