Headlined by European superstar Nathaniel, another group of runners are retired to stallion duties.

Updated November 8th: Two new tidbits I caught today. First, Danedream (GER) will run in Dubai in March and then will be covered by Frankel after the meet at Meydan. Second, and more suprisingly, Hansen will stand at Ashford in 2013. You can see my rundown on his pedigree here.

With the rash of retirements that happen this time of year, I have to do another Roundup Edition of Pedigree Profiles in order to keep up. Great to see successes on the track with geldings, since we know they're coming nback to training next year. I'm also excited that we see a number of fillies and mares that are currently scheduled to come back to the track next year. Hopefully we see the likes of Paynter come back to join Game on Dude, Fort Larned, and the rest of the older horses in order to compete for the Classic. A large number of fillies and mares were sold last night at the Fasig-Tipton November Sale as Racing or Broodmare Prospects, so hopefully we see the likes of Contested, Zagora (FR), and In Lingerie return to the track after their offer/purchase at auction. I'll talk about the auctions in the near future. AND HAVRE DE GRACE SOLD FOR $10,000,000!!!

But here, we'll talk about the top headlines in retirement news. Nathaniel deserves his own, but at least I can start off with him.

Nathaniel is as good a horse in Europe as you can ask for who is not named Frankel. Amongst his wins are the Group1 George VI, Queen Elizabeth, and Eclipse Stakes. He is a lifetime winner of 1.4 million pounds (which may or may not be 2.7 billion dollars, but my conversion may be incorrect). Almost as impressively, his 5 seconds include losses to Frankel, Snow Fairy, Danedream, Farhh, and Treasure Beach. You can count those five amongst the best turf runners in the world.

From my previous article about Frankel: Galileo is the premiere stallion in the world. There is no question about that. His 2011 stud fee was 225,000 Euros and is "Private" in 2012. He's sired champions, both male and female, like he was picking up pennies off the street. He is by Sadler's Wells, one of the best stallions in the history of European breeding, and out of a Arc winning mare, Urban Sea. She was the Highweight older mare in France in 1993 and the Broodmare of the Year in England and Ireland in 2001. As if Galileo needed any more firepower than this, Urban Sea is a world class producer. Galileo's siblings include Sea the Stars, who basically won every Group 1 race in Europe his 3 year old season of 2009. And if that wasn't enough, four other siblings won Graded or Group events, one won a listed stakes, and another placed in a Group event. Galileo's pedigree is absolutely unparalleled and unrivaled. Additionally, his broodmare sire, Miswaki, is by Mr. Prospector, further adding to the ridiculously deep pedigree he possesses.

An unquestioned performer, Nathaniel should provide an interesting alternative as a freshman stallion to Frankel when he stands at Newsells Park Stud in England. In fact, Nathaniel is better bred on his female side. Personally, knowing that Frankel's price tag will be exorbitant, I would quickly seek out Nathaniel to breed to provided I could afford the fee. The page below is his half-sister (well, actually 3/4, since Nathaniel's grandsire is Sadler's Wells) just to demonstrate the potency of Magnificient Style. Note the "Other black-type winners" section: 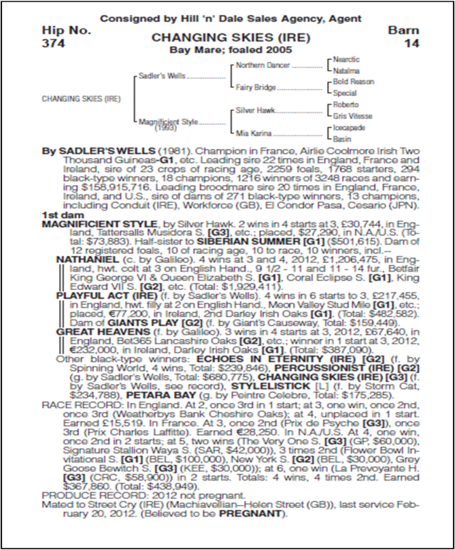 Fort Larned, winner of the 2012 Breeders' Cup Classic will be retired to stand at... wait, really? A really solid performer from the 2012 campaign who is not retired??? Surely you jest. Well, I've lost all composure here...

His sire, E Dubai currently stands in Pennsylvania. That should say something about him right away. He is by Mr. Prospector out of a Lord At War (ARG) mare, so his pedigree is not lacking. He currently stands at 7 on the General Sires List, but without Fort Larned's winnings, he would rank in the mid 50s. Three of his best progeny are Fort Larned, Desert Code (winner of the BC Turf Sprint), and My Gi Gi (winner of the G2-Honeymoon Handicap). The pickings get a little slim after that. Desert Code does stand at stud in California, with a stud fee of $2,000.

His dam is Arlucea who has two other stakes foal: Izarra (2nd G2-Oak Leaf Stakes) and Moonport (2nd in a listed stakes at Ellis Park). Most importantly, his granddam is the great Bayakoa. Unfortunately, she was euthanized in 1997 with only 4 named foals, so her production record is slim. But there is no doubt that a mare that won everything, and I really mean everything, possible for her at the time is a valued addition to his pedigree.

Fort Larned will continue racing and hopefully we see more of the same G1-level form from him in 2013 before he is retired to stud.

Get Stormy, Matt's pick in the Fourstardave, is his sire's leading lifetime earnings winner, with his greatest successes coming on the turf. He has won three G1 events lifetime: The Maker's Mark Mile, The Woodford Reserve Turf Classic, and the Gulfstream Park Turf Handicap and has a lifetime earnings of over $1.6 million.

Stormy Atlantic has had a number of nice runners, the best of whom prefer the turf and synthetic surfaces to dirt. He is currently 11th on the General Sires list. He has a very nice spread of earnings amongst his progeny, with the highest earner this year being Next Question who has earned $364,570; his total 2012 progeny earnings are $6,487,59. That screams that he gets quality offspring and is not reliant on 2 or 3 stars to rack up big wins to pad his numbers. He stands for $30,000 at Hill 'n' Dale Farms.

His dam is Foolish Gal by Kiris Clown. She is not a winner. She has four other foals, only one of which is a winner. his second dam is Galaxy North who has 16 foals, none are stakes horses. Additionally, none of her foals have produced any stakes horses. So the female side of the pedigree is a little light. in fact there is only one other stakes horse anywhere in the past three generations of his female family and that is a listed stakes placed Lady Mojo who is out of the half to Get Stormy's granddam.

A great turf runner who showed enviable class, he's going to have to work his way into the elite company of the top end sires. Should be a long road for him. I look for him to be priced low and try to fill a large books his first year at stud.

Algorithms is undefeated in his three lifetime starts. He showed high quality talent, but was unable to remain sound enough to continue on the Derby Trail after his win in the G3-Holy Bull in January of this past year. The Holy Bull was a quality field, with Hansen, Silver Max, My Adonis, and Fort Loudon amongst its starters.

He is by Bernardini, who counts among his progeny millionaires Alpha, Stay Thirsty, and To Honor and Serve (who is profiled below). Bernardini is one of the elite sires currently at stud. His $150,000 stud fee reflects that as well. HA son of AP Indy, Bernardini has shown himself to be a fantastic sire, but has yet to have a son at stud. There is no doubt that he will hit eventually, and with the crop of his sons being retired this year, he has a good shot at siring a nice sire in the very near future.

But here's the reason that Algorithms is even worth profiling: Ava Knowsthecode. A daughter of Cryptoclearance, Ava Knowsthecode has 10 registered foals, 4 of which are graded stakes winners. Justin Phillip (G2-Woody Stevens), (G2-Hutcheson), and Successful Mission (G3-Miami Mile) all represent her well. Two are from the In Reality sire line while the other two are not. Basically, she's going to give you a quality foal no matter what. Pretty impressive. 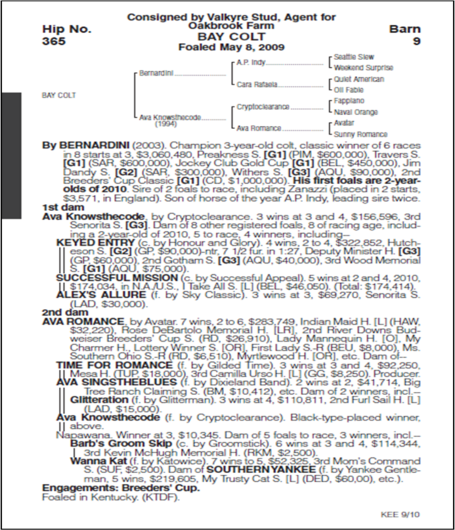 Another son of Bernardini headed to the stallion barn, To Honor and Serve was the winner of six graded stakes, to include the G1-Woodward and G1-Cigar Mile for a total earnings figure of nearly $1.8 million.

I've already covered Bernardini, so onto his broodmare, Pilfer. (Note: Pilfer was purchased last night at FTKNOV. She was hip 129 and sold for $1,950,000 to Borge Torrealba Holdings). Pilfer has four sons. To Honor and Serve is the only one worth mentioning. But the family is extremely solid and includes Pilfer, India (G2-Azeri), and a winner of a listed European Stakes. It is a nice female family. Further back in his pedigree you find more stakes winners as well. Nothing anywhere near the quality of To Honor and Serve, but definitely a deep family that has a proven track record of high end production.

He will stand at Gainesway Farm in Lexington in 2013. 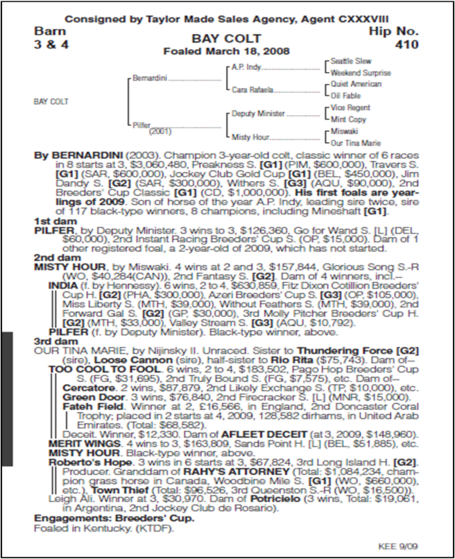