The expected pacesetter, Trinniberg (50/1), drew post position #9 and should go right to the lead from the moment the gate opens.

2011 Breeders' Cup Juvenile winner Hansen (10/1) was one of the two horses remaining with the dreaded #1 post position still open. Ireland's Daddy Long Legs (50/1) drew the rail, while the Juvenile champ received the much more preferable #14 position.

My Adonis (50/1) is the one alternate entry ("AE") in the field in the first year of a new rule allowing up to four alternate entries. If any of the other twenty horses scratch prior to Friday morning, My Adonis will enter the race.

UPDATED: My Adonis is now officially a scratch from the Derby.

The prep races are done, the field has been drawn and the morning lines have been assigned. It's time to handicap the 2012 Kentucky Derby!

Below are the entries, post positions and morning line odds for the 2012 Kentucky Derby. 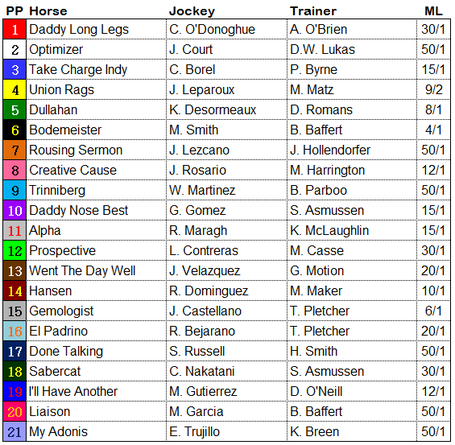 #21 - My Adonis is an alternate entry