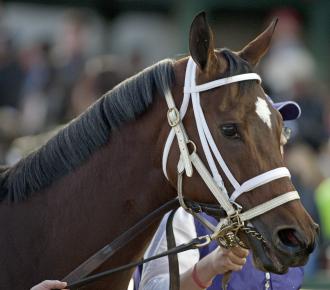 To be frank, I really didn't know that much about Havre De Grace's bloodlines as I probably should have. But after some brief research into her female tail, I was shocked to see how well bred she is. The short of it is that she is a direct female descendant of 3 Reines du Course, originating with Uvira (b. 1938), who is the origination of the entire Uvira II family (the 3L family in shorthand). That is some serious firepower in her genes.

Her sire is Saint Liam, who has no ranking as a broodmare sire, due to his short time at stud. However, her grandsire, Saint Ballado, is currently 14th on the Bloodhorse Broodmare sire's ranking. He sires SWs at a 3% rate as a BM sire. That is good, but not among the elite.

But the good part is her female tail. Man is it good. I get excited just looking at it.

Before I get started, Reines-de-Course are a way to denote the best producing mares in the history of thoroughbred breeding. At Pedigree Query.com, they are the mares annotated with the green stars next to their names. These are the cornerstone mares for the great families of thoroughbred racing. Lots more reading on that here.

Dam: Easter Brunette. Carson City - Toll Free (Topsider). Her record on the track was 11 Starts, 3 Wins, 3 Places, 1 Show, Career Earnings: $36,851. Her two allowance wins came at one mile on the dirt. She is not a SW. Carson City is currently #11 on the BM sire ranking and sires SWs through his offspring at a 6% clip. I would love to have a Carson City mare as a Broodmare. Easter Brunette's production record is just ok. She has 5 registered foals and three winners, with no major winners besides HDG. What concerns me is that she has no registered foals from 2009 or 2010, which may mean they just haven't been added to database, but could also mean that she is difficult to get in foal (or has trouble keeping them). Without knowing more about the mare personally, it is tough to know.

Granddam: Toll Fee. Topsider - Toll Booth (Buckpasser). Her record on the track was 39 Starts, 7 Wins, 6 Places, 10 Shows Career Earnings: $333,917. Her Ungraded stakes win came at 6f on the dirt. Buckpasser was a leading broodmare sire in 1983, 1984, and 1989 and is generally considered one of the best broodmare sires in recent memory. Toll Fee was an UnGr SW and was placed in a GII and GIII race. Her production record is once again ok. She has 10 foals, 4 of which were winners, though some of the records appear incomplete.

Great Granddam: Toll Booth (Reine-de-Course). Broodmare of the year in 1991. Buckpasser - Missy Baba (My Babu). Her record on the track was 22 Starts, 3 Wins, 3 Places, 5 Shows Career Earnings: $32,330. She has no stakes earnings in her career. The information on her races is not available at Equibase due to the fact that she is so old. Below are the results of her progeny:

Wow. Five stakes winners. 7 winners of 100k+. 12 foals and 11 winners. Amazing. That's alot of quality there. The great part is the durability of the foals (granted, it was a different era) and the fact that they were all successful on the track. Then the success is passed through most of her offspring: Key to the Bridge has 3 foals that won $200k; Idle Gossip has a 270k winner; Christiecat has a foal that won like a trillion Yen; Plugged Nickel became a respected stallion in South Africa. Very consistent pedigree in terms of producing winners. Very impressive.

Older Dams that even great granddam:

Missy Baba (Reine-de-Course). The following is a brief explanation of Missy Baba from Reine-de-course.com. This is part of the profile of Ulvira.

We now come to the crown jewel of *Uvira II's producing daughters, Missy Baba, who has more than earned her own place on the Reine-de-Course list. Missy Baba foaled six stakes winners: Master Bold, a Bold Ruler colt who amassed $106,721 in earnings; Durazna Stakes winner Chokri, a daughter of *Herbager; minor stakes winner and leading sire Raja Baba, a son of Bold Ruler; Argentine stakes winner Dromba, a colt by Droll Role; Sauce Boat, a Key to The Mint colt who won the Arlington-Washington Futurity; and Ashland Stakes winner Gay Missile, a daughter of Sir Gaylord who has forged her own contribution to the immortality of the family name.

Missy Baba also foaled two stakes placed horses; Sooni, a daughter of Buckpasser and Babas Fables, a son of *Le Fabuleux. Just as important to Missy Baba's story are the unraced fillies Toll Booth by Buckpasser, the 1991 Broodmare of the Year; and stakes producer Pennyworth by Key to the Mint.

Ulvira (Reine-du-Course). Finally, the last dam to be examined is also the most legendary of them all. You can read all about her here, but the crux of it is this:

When A. P. Indy crossed the wire in the 1992 Belmont Stakes, he became the second classic winner foaled from the Secretariat matron Weekend Surprise. In 1991 Toll Booth, another member of the family, was named Broodmare of the Year and in 1994 yet another member of the clan, Sauce Boat, was broodmare sire of Preakness and Belmont Stakes winner Tabasco Cat. All this on the heels of Raja Baba, leading sire of 1980, who had led the way for this, the family of *Uvira II, winner of the 1941 Irish Oaks.

It is all too easy to overlook good branches of *Uvira II's family, branches still capable of producing the top horse like Obedient, Navira, Purdah and Blarney Bess because of the blinding effect of Missy Baba and her enormous influence. That would be a mistake. *Uvira II contributed much more than just Missy Baba.

So, what does this all mean? Havre de Grace is directly descended from one of the best daughters of one of the best producing mares of all time. And while the Reines are 3, 4, and 5 generations in her past, you just don't find impeccable bloodlines like that. You most often see the Reines-de-course pop up in a pedigree as the dams of the most influential stallions. Take a look at Fusaichi Pegasus. You see 5 Reines, all foaling sires of consequence. It is very rare (and very valuable) to see a direct female lineage of such amazing genetics.

I'm not going out on a limb to say that no other broodmare with her racing record in recent memory has the same plethora of talent in her lineage. Not Zenyatta, not Rachel Alexandra, not Azeri. Havre de Grace stands alone in that regard. And while anything could happen with her foals, I can say with certainty that by looking at her lineage, she is set up for success. She's going to be a quality producer, and you can't ask for anything more.