2012 Belmont: The View from the Grandstands

Share All sharing options for: 2012 Belmont: The View from the Grandstands

I arrived at the gate to board my flight to JFK in NYC and I get a text. "Holy crap, he scratched." Four words that completely changed the event that I was traveling 1000 miles to attend. But nonetheless, the experience of going to the Belmont and seeing a great race that ended in a photo finish is something I will relish forever. This despite the fact that I lost the photo, but that's how it always works. 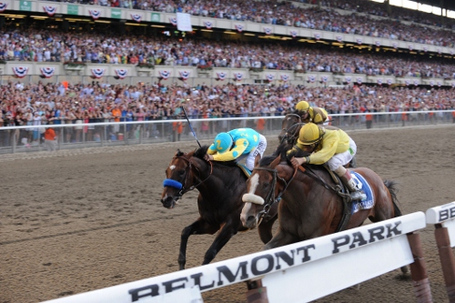 I did not take this picture, but I am up there in the stands, if you look closely, I'm the ridiculously handsome one. You can't miss me. via blogs-images.forbes.com

Great attendance at Belmont on Saturday. The crowd was really into all of the races. The best part was that the track, being as big as it is, was able to handle the traffic at the concession stands and at the betting windows with ease. A great experience overall.

There are a few strange things about the track though. First, the furnishings inside of the grandstands literally are from 1965. Everything is a shade of green or brown. The font used for concessions signs remind me of something out of the Price is Right from the '80s. Second, the track is enormous. I mean so big that it is very difficult to even see what is happening on the back stretch. In fact, when they run a mile on the dirt, you really couldn't even see the horses load. Third, they didn't pipe the on track announcer into the grandstands until the Belmont. So every start caught you by surprise.

There were a couple of great highlights from the day. First was the great run of Caixa Electronica in the True North Handicap. He was way back at the turn but just blew away the field in the stretch. Put a few bucks in my pocket there. Best quote was, "Damn, your pick is last, I swear to god I'll kill you if he loses." My response, "Just wait!" Even at 7-2 there was some value in him, since he was much the best. Smiling Tiger took a lot of action, enough to keep Caixa up there.

Great race in the Longines Just a Game Stakes. My two top picks to win, Winter Memories and Hungry Island, were not able to catch Tapitsfly. Just a good run by Tapitsfly setting all of the fractions and being very consistent too, as all three 1/4s were 23s.

In the Woody Stephens Stakes, the betting public was straight dumb. A ton of on track action went to Bourbon Courage, which admittedly is an amazing name. However, Trinniberg was MUCH the best here. I ran to the window with 1 MTP in order to throw down on him. In my mind, anything more than 2-1 on him was just a steal. The race was over when Trinniberg ran the first 1/4 in 22 and 2. Unless he went out in 21 and change he was going to win. Easy money right there.

The Manhattan Handicap was a strange race. But the on track crowd was really up for it as the Belmont grew near. The only speed in the race was Papaw Bodie, and at 10-1, I put a couple bucks on him. Brilliant Speed was who I saw as the best, but he was never a factor. He just looked sluggish from the gate. Strange. But Ramon Dominguez rode Desert Blanc (GB) perfectly here. He was just patient and waited for a quarter left to move and held off Papaw Bodie while running past a badly fading Hudson Steele. Great ride.

But the Belmont was where the excitement was. I loved Paynter. I'm not going to sum the race up, since Matt did it far better than I every could, so let's just talk about what I had on the line. Desert Blanc killed my Pick 6 and Pick 4 tickets. But I was 4 for 5 on the Pick 6, so I was hoping for a consolation payout. I had a Paynter-Union Rags Ex Box. And as Paynter stayed up around 7/2 near post time, I hammered him pretty hard (well, that's relative, pretty hard for me). When the fractions were posted and they were so slow, through the first three quarters, I got really excited. Baffert was getting the race Paynter needed to hold off a late charging Dullahan and a stalking Union Rags. When they turned for home, and the second to last quarter was run in 25, I'm standing in the aisle yelling for Paynter to hold off Union Rags. Dullahan was nowhere to be seen and clearly was not a threat.

At the 16th pole I snapped this: 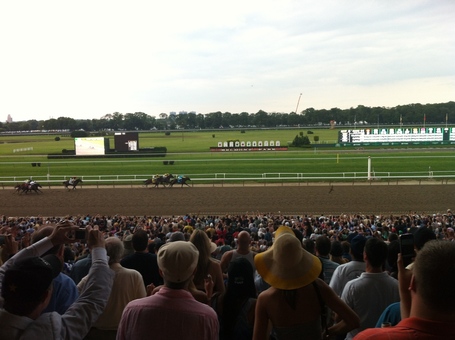 I was losing my mind at this point. In fact, 2 days later, I still have no voice. But as I took the picture, I could see Paynter had come slightly off the rail and UR was eating away at the length that Paynter had on him. As they closed in on the wire, the 80,000 in attendance knew it would be close. The head bobs were gut wrenching on the big screens but each bob made it look like UR was just that much more ahead. When they crossed the line I knew I was beat.

When they flashed "PHOTO" on the big screen I REALLY knew I was beat.

I was a neck away from a really great payout at the Belmont. But that neck didn't really matter since it was an amazing event to experience. I ended my day with the same amount of money I started with, minus train/cab fare and refreshments.

But the question I got asked the most was, "Would he have won?" Well, we all know that we'll never know, and even if he had run, there's no telling how much trouble he could get into from a bad start, to a stumble, to a bump. But based on how the field ran, the fact that I'll Have Another is extremely comfortable running just off the pace and to the outside of the pack, the slow fractions, that IHA is just plain better and faster than Union Rags, and that the speed figure was well beneath what IHA is(was...) capable of doing, you have to believe that IHA was going to win in the scenario that played out on Saturday. And while none of that matters, the speculation is fun.

All that being said, I have to apologize for my lack of participation on Saturday in the Open Thread. AT&T's cell coverage of Elmont, NY must be amongst the worst areas in the world. I literally only got texts when standing by a specific bench by the bathrooms. It was brutal. And 3G coverage where I could access the site? Forget about it. I had to literally exit building and go about 100 yards to get anything. Just terrible. So for that, I'm sorry.