Few runners this year burst onto the scene as quickly as Paynter did. From a dominating allowance win on the undercard at Pimlico on Preakness day to nearly wiring the field in the Belmont, to rolling over the competition in the Haskell Invitational, he certainly catapulted to the top of the 3 year old class in no time. (author's note: I'm still bitter about him not beating Union Rags. So bitter...) But the really interesting thing about him is that Ahmad Zayat and his son, Justin, repeatedly emphasized that Bodemeister was not the best colt in their stable, this despite Bode putting up an incredible showing in both the Kentucky Derby and the Preakness.

What makes Paynter so special that the Zayats, and Bob Baffert to an extent, knew that he was just that good? Let's take a peek.

I'm going to forego the usual format here, as I'm not looking at Paynter as a stallion prospect, well, not yet at least.

Let's look at his page from Book 1 of the September 2009 Keeneland Yearling Sale: 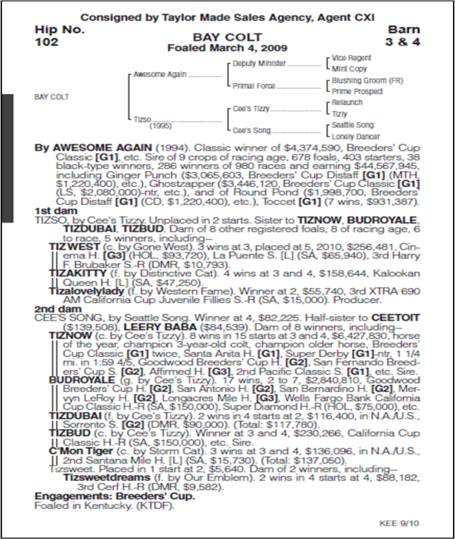 (as an aside, at the same sale a colt who is a 1/4 to Zenyatta out of her sister Balance went for $4.2 mil (but is unraced thus far). And an Empire Maker colt that went for $525k has maybe the greatest name ever: Empire Taker)

Cee's Song was the 2001 California Broodmare of the Year. She was an amazing producer with two Champion-caliber offspring. Her cross with Cees Tizzy was as productive a mating as can be dreamed of (and yes, I actually do dream of things like this).

His pedigree certainly shows the stamina to go 10 furlongs, with Tiznow featured right there in the middle. Paynter's siblings are extremely successful at 6-8 furlongs on the turf and the dirt, so there's the genesis of his speed.

And Awesome Again? From the Stallion Register:

That's some very good names that all succeeded at classic distances. A few names further down is Paynter himself.

It makes perfect sense why the Zayats thought they had an even better runner in training with Bodemeister. In his first recorded work, Paynter posted a bullet at Hollywood over 5f, clocking a solid 59.2 second workout. Once a week he went out and posted great works (2/29 at 5f on 27 Jan; 3/55 at 5f on 6 Feb; 1/24 at 6f on 11 Feb) all before his Maiden Special Weight debut, which he easily won over 5.5f by 4 1/4 lengths. He posted a very nice 93 speed figure (Brisnet figures used). And he just got better as he went on, culminating in his 107 figure in his allowance race at Pimlico. His showing in the Belmont was impressive and his run in the Haskell was awe inspiring. He has yet to disappoint since reemerging in graded stakes company this summer.