The 2012 Travers Stakes, the "Mid Summer Derby", drew a field of 11, led by the 5/2 morning line favorite and Jim Dandy winner, Alpha. Post time for the Travers Stakes is 5:46pm Eastern time and the race will be part of a two-hour broadcast on NBC. The telecast will also show the G1-Test and G1-King's Bishop.

In mid-May, racing fans were salivating at the thoughts of horses such as I'll Have Another, Bodemeister, Paynter and Union Rags running in the Travers. Even juvenile champ Hansen was a possible Travers entry until a recent tendon injury put his career in jeopardy. But despite the defections of the "big name" three-year-olds from the spring, the Travers Stakes will be a competitive and deep race, from top to bottom.

Joining Alpha in the Travers are:

Below are the entries, post positions and morning line odds for Saturday's $1 million Travers Stakes. I'll have more on the Travers later this week. 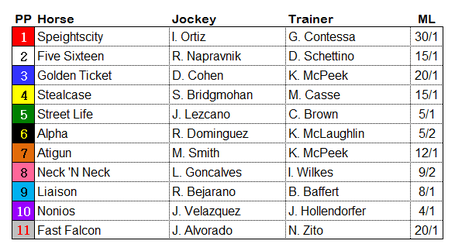