Over the past three plus decades, American horse racing fans have waited and wondered when a horse would come along and sweep the Kentucky Derby, the Preakness and the Belmont Stakes. Since Affirmed in 1978, every horse that has tried has failed, including the disappointing pre-race retirement of this year's challenger, I'll Have Another.

Across the Atlantic Ocean, races fans in England have waited even longer to see a horse achieve their Triple Crown, although for different reasons. The English Triple Crown is spread out over a period of almost five months, at three distinctly different distances and courses. While the schedule and conditions are one of the reasons for the drought, another is due to the fact that the series in England isn't held in the same regard as our trifecta of three-year-old racing (as documented by Teresa Genaro prior to the Belmont Stakes). But just like the American Triple Crown this past spring, the English Triple Crown features a horse with the ability, along with the desire of the connections, to break the drought.

It's been over 40 years since Nijiinsky became the last winner of the English Triple Crown (1970), a feat that Camelot (GB) will look to duplicate on September 15th in Yorkshire.

The English Triple Crown involves the 2000 Guineas at Newmarket, the Epsom Derby at Epsom Downs, and the St. Leger Stakes at Doncaster. The Guineas is run at one mile, the Derby at a mile and a half, and the St. Leger Stakes in a final stamina testing 1 3/4 mile journey. Those three races are three of the oldest, most prestigious races in the history of the sport. The 2000 Guineas was first run in 1809 at Newmarket and was named for the total purse awarded at the time. The Epsom Derby, or just "The Derby", was first run in 1780 and is named after the 12th Earl of Derby*. The St. Leger, perhaps the most unknown of the three to American fans, is the oldest race of the three, first run on September 24th, 1776, just a couple of months after the beginning of the American Revolution. The race is named after Anthony St. Leger.

Camelot, a three-year-old son of Arc winner Montjeu (IRE), has raced in the shadow of Frankel (GB) for much of the the last year, which is understandable when you consider the achievements of The Freak. But consider the feat that Camelot could possibly accomplish over the next three months: the English Triple Crown and the Prix de l'Arc de Triomphe or Champions Stakes. Camelot is pre-entered for both the G1-Queen Elizabeth II Stakes and the G1-Champion Stakes on British Champions Day (October 20th), but I would think that an English Triple Crown winner, should he pull off the feat, would have the Arc as the logical conclusion to the season.**

By most accounts from the British racing press, there is little to stand in Camelot's way at breaking the Triple Crown drought. His rival three-year-olds have yet to pose a serious challenge and Camelot appears to be significantly above his best challengers. Of course, we American racing fans are all too familiar with the "can't miss" Triple Crown horse (Spectacular Bid, Smarty Jones, Big Brown, and on and on and on).

Doncaster, like most courses in England, has it's own unique configuration and layout. (see photo below via Google Earth). The course is similar to Ascot in that it's a triangular shaped course with a chute for sprints and miles run on the straight. The course can also run races at a mile starting from the chute on the right-hand side of the course, somewhat similar to one-turn miles in North America.

The St. Leger starts from the far left-hand portion of the course, just after that hairpin turn (that finish line is just before that turn). The field will run down the backstretch while descending to the lowest point on the course just prior to entering the wide, sweeping turn. Just prior to exiting the turn, the field will pass the highest point of the journey, meaning most of the middle part of the race is run uphill after an early downhill run. The course then essentially levels out for the final five furlongs. 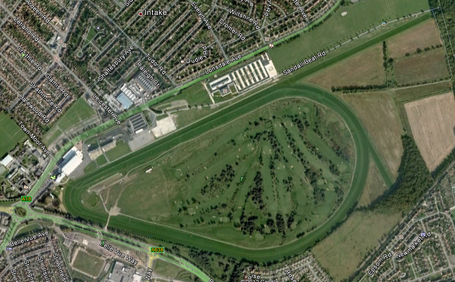 The St. Leger Stakes wont' be a walkover for Camelot but, at the same time, the colt appears in perfect position to put his name alongside the 12 other horses to win the English Triple crown since West Australian first pulled off the feat in 1853. (There were three horses to win the Triple Crown during World War I but their status as true Triple Crown winners is debated due to the change in racing conditions during that time.)

*This doesn't have to do with the English Triple Crown, but if you want a fascinating book to read about the great Eclipse, who ran his first race at Epsom Downs in 1769, I highly recommend EEclipse: The Horse That Changed Racing History Forever.

*To add to Camelot's fantastic season, he won the Group 1 Irish Derby becoming the first horse in ten years to pull off the English/Irish Derby double.