Rick Dutrow and the Short Turnaround

Share All sharing options for: Rick Dutrow and the Short Turnaround

Willy Beamin' has a great name. He has a great music video. (UPDATED: Forgot about his amazing touchdown dance. Thank you Nate Washington.) He gets all the ladies. He also has now twice shown the ability to come back on extremely short rest and win races. Good races. But is this a product of the training methods of Rick Dutrow (no, not those training methods) or is it an underused tactic to maximize a horse's potential by ensuring he/she is in the right spot to win?

European and Aussie trainers don't shy as much from the extremely short turnaround as do North American conditioners. In fact, if done with a sound horse, there is no reason we shouldn't see this more. Now granted, the pool of runners capable of taking that kind of pounding is such short time periods is probably not that large. But it certainly is not limited to one horse. In fact, So You Think (NZ) ran on three days rest once, and on a week or so several other times.

I think there are three contributing factors to the reason why trainers shy from this racing patters:

The basic premise behind the horse's ability to come back on short rest is the same premise behind why most trainers put in a good work 4-5 days before a scheduled start. It's called Supercompensation. As a model for physical training, I think it describes a person/horse/mammal's ability to train, recover, and perform. This graph describes the effects well: 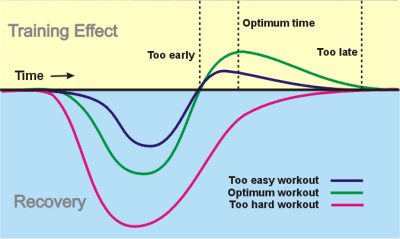 As mentioned by a large number of sources this past week, running on 3-4 days rest isn't that uncommon. That's the reason why the Derby Trial existed in the first place. If you train/race well and come out soundly you can definitely turn around quickly and run again and you can hit that "optimal" peak during recovery and really outperform previous races. In fact, this should apply relatively well to handicapping and using a work as an indicator not just of overall fitness, but of a possible "Super-bounce", if you will.

But I think this goes back to the point that we Americans don't train our horses very efficiently. We rely more on natural talent than true conditioning. Breezing 4-5 furlongs once a week and jogging 12f every day may not be the best method possible. I personally would like to see more interval work, longer jogs, and incline work. But all of that is very difficult to accomplish at mainstream race and training facilities. Standardbred trotters are really big into interval work. So are a lot of international trainers. Doug O'Neill is a big fan of 8f works and showed their effectiveness with I'll Have Another's victories this year.

The following is from a study on bone strength and density conducted by D. M. Nunamaker, VMD, Diplomate ACVS entitled, "On Bucked Shins" and presented to the AAEP.

*Note: MCIII is the third metacarpal, or shin

For reference, a breakdown of the bones in the forelimb of a horse: 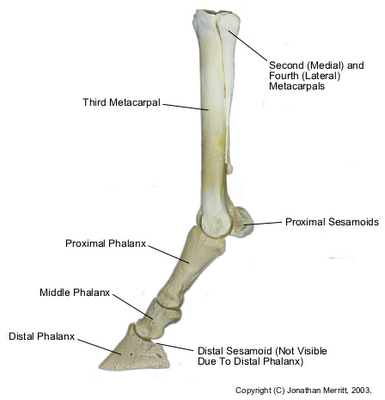 The study as quoted focuses on 2 year old training, but I'm positive that it does show that the propensity to work long and slow instead of short fast interval work doesn't do the horse any favors in the long run. Additionally, the relatively recent addition of winter racing means that horses do not get the 3-4 months off as they had 50 years ago. If you've seen races at Turfway during winter months, just seeing the outriders wrapped up in winter clothing makes you understand how hard it is to race at those temperatures. And without that layoff, those small accumulated dings, scratches, and nicks can add up to take their toll on overall soundness.

So, what does this all mean? 1- A short (short being defined as anything within a week, I think) turnaround is probably an underused tactic for sound horses to outperform expectations. 2- Trainers can train their horses more efficiently by emphasizing speedy interval work, which in turn can create better bone density and soundness. 3- The standard understanding of 3-4 days being too short is wrong(ish) for sound horses. 4- I'm really good at rambling, nearly nonsensical posts.

(h/t to thoroedge.wordpress.com for a ton of supporting information)