After romping in the slop at Oaklawn Park to win the G3-Southwest Stakes, Super Ninety Nine firmly established himself amongst the top contenders currently on the Kentucky Derby Trail.

The Southwest Stakes, which henceforth will be known as the Bob Baffert Hot Springs Classic Stakes, showed two things: the field of the Smarty Jones looks like it is going to be exposed as soft and Super Ninety Nine is one heck of a runner. Now if he can hold off the charging masses while running from the front of the Derby field, well, who knows? But he certainly showed the class necessary, albeit on an off surface, to be a serious Derby contender.

By Pulpit, Super Ninety Nine ("99" from here on out) is a winner of three races in five tries, which includes a second in the G3-Hollywood Prevue Stakes. An influential sire and one of the best sons of A.P. Indy at stud, Pulpit was a consistent producer of stakes horses and a sire of five millionaires. He had begun to show that he was a very nice sire of sires as well, with sons Corinthian, Ice Box, Stroll, and most importantly, Tapit who has concretely established himself as an elite sire with a stud fee of $125,000 LFSN. In fact, a no guarantee contract to Tapit can be had for a bargain of $100,000, that’s how popular he is. Unfortunately, Pulpit died this past December at Claiborne Farm. Pulpit has sired 63 stakes winners and 39 GSWs, including 11 North American G1 winners (note: numbers may not be updated). A reliably dominant sire, Pulpit showed the ability to get great horses that were not only precocious but also showed the ability to get classic distances on the dirt as they matured.

99’s dam is Exogenetic by Unbridled’s Song. Unbridled’s Song is a very good broodmare sire with 38% of foals being winners, 50 (4.3%) of which are stakes winners. Of 99’s siblings, only one has shown top class, Elusive Horizon. She is a 5 time listed stakes winner in the great Northwest, as she split her time between Emerald Downs and Hastings Park. Wait, a sibling to a solid EMD horse?!? I think we just found Matt’s new favorite Derby horse!

However, once you get past that one sibling, the pickings are slim in terms of successful family members in the past two generations. The only one that sticks out in comparison to the other winners is a half sister to Exogenetic, Exogenous, who ended her career with just under $950,000 in earnings. They are both out of Tangled Up in Blue (Phone Trick). Exogenous is by Unbridled, which actually makes she and her sister ¾ siblings. But Exogenous showed absolute brilliance on the track in 2001 with twin G1 wins in the G1-Beldame and the G1-Gazelle while finishing second in both the G1-Alabama and G1-Coaching Club of America Oaks and third in theG1-Mother Goose. That’s a brilliant year. But the story turns sad as she was saddled for the Breeders’ Cup Distaff. In the paddock, she was spooked, flipped, hit her head, and eventually had to be euthanized several days later due to complications from brain swelling. She was the second betting favorite as she was going to the track that fateful day at Belmont in the fall of 2001. Had she lived up to the bettors’ expectations in the Distaff, she would have been a top contender for the 3 Year Old Filly Eclipse Award, as she was clearly the best Classic distance filly that year. Instead, Xtra Heat, after finishing second against the boys in the Breeders’ Cup Sprint took the award. Granted, Xtra Heat had an amazing year, as she won 4 Graded Stakes, to include the G1-Prioress and ran a total of 13 times in 2001, all in stakes, and collected 9 wins. But, in my opinion, the classic distance division bias that Eclipse voters demonstrate would certainly have lent far more weight to Exegenous’ bid than just comparing records.

Last year, Bob Baffert campaigned two speedy 3 year olds that made their presence felt during the Triple Crown. Both Bodemeister and Paynter went right to the front and dared the field to catch them. Three times it looked like they might pull out the victory. But three times, they were run down. Granted, I’ll Have Another’s tactical speed was unbelievable and Paynter almost held off Union Rags (note: ugh), but we’ve seen how difficult it is for front runners in the Triple Crown to wire the field. But out west, that’s how you win: from the front. Can 99 get to the front and stay there? If history says anything, it’s no. But the form he has shown thus far seems to say that he has a chance and his pedigree definitely agrees that classic distances on the dirt are right in his wheelhouse. 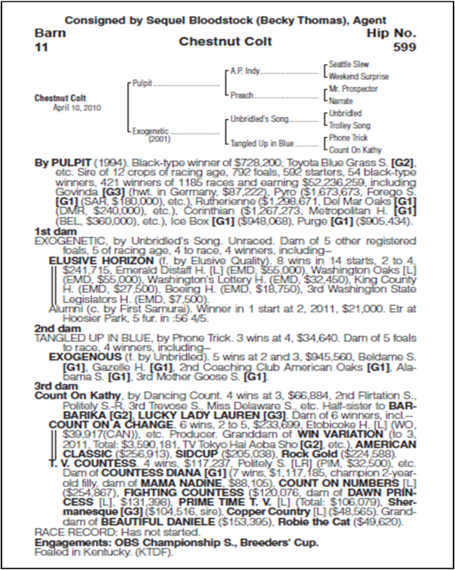