Fanshawe's Horseplayer World Series Experience, or, How To Pick A Place Horse

Written in the style of "What Did You Do Over Your Summer Vacation?" since the Hunter S. Thompson gonzo version, although one helluva lot funnier, might get me in trouble...

Share All sharing options for: Fanshawe's Horseplayer World Series Experience, or, How To Pick A Place Horse 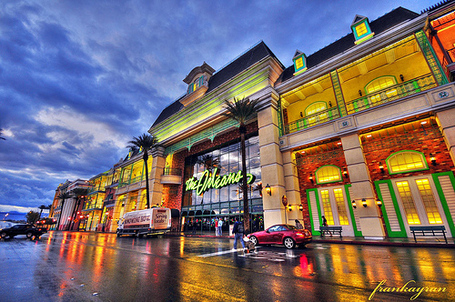 There may be no handicapping grind like the one that one experiences when playing in any tournament held at The Orleans in Las Vegas. Each of them (Spring, Summer, Fall, and World Series in February) is three days long, with players making 15 optional plays each day from as many as nine available tracks. The crown jewel of the Orleans/Coast Casino tournaments is the World Series, which ended this past Saturday, with a record number of entries, and a record-high score being posted by the winner.

The HPWS has an interesting format in that the first $2 of your mythical win wager pay full odds, while the remaining $18 have odds capped at 19-1. All place bets are capped at 9-1. Players tend to refer to their totals as "points," rather than dollars. This year’s winner crested 5,100 points, where 3,500 would have won the event in previous years. And with 792 entries in the tournament, every price horse was hit by someone. I didn’t finish in the cash this year, falling a few hundred points shy of 60th, although, I think I handicapped pretty well. But, as I heard another player say at my table on Saturday: "One person leaves with 350 grand. The rest of us leave with woulda coulda shoulda stories."

My flight into Vegas originated in Atlanta. I was on the aisle, and when the gentleman in the window seat saw me pull my Brisnet program from my laptop bag, he asked: "You headed to Orleans?" I told him yes, and lo and behold, I had already met a handicapping compatriot. And, as it turns out, a whale at that. We didn’t bother each other much, because we were both head-down and working on races for most of the flight, but we spoke enough that I learned that there are some people out there that really are pros, with pro organizations. And many of them sit at tables in big-stakes contests like the Horseplayer World Series. This man was a member of a consortium that makes its own proprietary PPs, complete with speed figs compiled by someone on their paid staff, comments drawn from those in the consortium (each of whom was charged with watching trip replays from a specific part of the country and sending in trip notes), and obscure trainer/jockey nuggets culled from track sources. This gregarious man was the small fish in his group he said, but later he told me he wagered in the vicinity of $2.5 million per year. After meeting his friends later in the weekend, I think it is safe to say, that a lot of us want to get to where these people are. Most of them were retired, or wealthy from other interests, but all of them were now pro handicappers. They bet the races. This is what they do, every Wednesday through Sunday. And they win. A lot.

I was glad of the four-hour flight, not just for the company, but for the fact that it enabled me to handicap all of the races for Day 1. My new friend and I split a cab to The Orleans, a not-too-shabby version of Vegas (read: affordable) situated parallel to the Strip and New York, New York. After settling in, I walked up to check out the rooms where the tournament is held -- two large ballrooms outfitted with several televisions. The larger room, the Mardi Gras room, had all the touchscreen tote machines for the tournament, while the smaller room, the Esplanade, had the lunch buffet. The touchscreen totes were an issue for most of the first day, as several players not used to electronics struggled to put picks in and this resulted in long lines. I was shut out of a longshot winning play because of one of these lines, which really frustrated me because I had gotten in line with 6 minutes to post. To their credit, the Orleans organizers added some live tellers to ease the minds of the Luddites, and by the second half of the first day, I rarely saw any lines but for mad-rush players trying to get picks in before turf races.

I chose the smaller room, even though it was a bit of a walk to go put picks in, but I needed to find a table with power, and it turned out to be one of the best decisions I made of the weekend, as I sat with some very convivial types, some of whom were stellar handicappers as well. As a seasoned tourney player at this point, let me tell you that there are just two types of handicappers at tournaments: great people, the types you would meet in blues bars, who are gracious, funny, and forthcoming; and then, there are assholes, the types that, no matter what, will not win because so much negative energy seems to encircle them, but will ruin your time if you are too close to them. (Note: if ever you are in a tourney and you find yourself with the latter...move. It’s not rude. In fact, it is the dignified thing to do.)

Day 1 began with strong coffee and toasted bagels, news of a shootout and sad deaths on the Strip, and then the first picks were in and the whirlwind began. The day went by in a blur, as almost all tournament days do, but this one had a single, recurring memory for me: runner-up. I had 10 seconds on entry #1 (as well as the longshot-winner where I was shutout) and four more on entry #2. You can’t win the tournament on the first day, but you can certainly lose it. I hadn’t at that point. All those seconds had my best ticket 1,500 back of the leader, but I could still be Zenyatta in this scenario.

So, here is the hard part. After playing all day, from 9 a.m. to 4:30 p.m., barely remembering to eat before they took the excellent lunch buffet down, your 15 plays for that day finally exhausted....do you you know what you have to do? You have to go back to the room and handicap for the next day. Now, this may be harder for some others than it was for me because I have a very specific methodology for picking out which races I will play in contests, and it helps me to ignore a great many. Regardless, it is still hard. And if you have no idea how to select the 15 you want from a pool of 99, you’ve got trouble. You really have to like handicapping. Thankfully, I do. I made out my list of races and wrote down the post times to see where the collisions might be, handicapped five races, grabbed a few beers and some chicken wings and went to bed.

Day 2 dawned and I had this feeling that I was a beam of energy. I honestly felt that it was a foregone conclusion that I had picked all of the races with prices to be had and that one of my two horses in each of those was going to score. Thirds. Fourths. More seconds. One 27-1 win at the end of the day. Meanwhile, all day long, it had been tables around ours going crazy with the beam of energy. There were prices everywhere. 12-1. 15-1. 11-1. 46-1. 37-1. And each time, choruses of people yelling out numbers and either "wire!" or "get there!" Day 2 ended with the leader, indeed the top 5, seemingly out of reach without some kind of magical handicapping day that Harry Calas would have to narrate from the grave.

And now, a bit dejected, and probably realizing that I am just playing to get into the top 60 to get a check and not just be an also-ran....do you know what I have to do? I have to go back to the room and find tomorrow’s 15. I have to go back to the room and handicap. I love it -- head down at a table in Brendan’s, the Orleans’ Irish Pub, with several pints of Guinness and a Fuddrucker’s sandwich and forms spread out on a corner table. Saturday card. Lots of stakes...my specialty. I mentioned to a fellow capper, a very good one I have seen win brick-and-mortar tournaments, that I was going to play 13 stakes the next day, and he drew from his bag a hand-scrawled list of all the races he thought might produce prices. "I think that is the wrong move, man," he said. "I don't see a single stakes race giving up longer than 4-1." If there is one thing about handicappers, we all think we have the secret formula. "Well," I said. "I know my game, and I am best at higher level racing."

Day 3 meant four aggressive swings to start. My thinking was that a price early might put me within reach of making something happen. Three thirds. A second -- all the more heartbreaking because the horse finishing first was a bomb. (Don’t you hate it when you know a race will produce a price, but you pick the wrong longshot?) In all, the day brought me a couple of wins, a handful more seconds and some good conversations with my tablemates, as our distance from contention loosened our tongues. My lead entry finished with 17 seconds from 45 picks...so, yes I think I handicapped pretty well....if just a few of those are wins, well...there is my woulda coulda shoulda story. (I am left asking myself why, oh why didn't I do any real betting!?!).

Saturday night it settles in that the tournament is over. I don’t know if it is like this for other players, but there is no faster way for time to move than the way it seems to when one is playing in a tourney. All of a sudden, you are watching the last races of the day (and kicking yourself for not taking 135-1 on I’ve Struck A Nerve...turns out the stakes did offer some excellent prices). I see Mr. Whale and he tells me that someone in his group hit the top 5. The leaderboard is final. "I wish I had bet the Risen Star," Mr. Whale says. "I would have had that bomb and been up there." Another woulda coulda shoulda story. The night is winding down, an excellent trio is playing in Brendan's, covering "Everybody Wants To Rule The World," and I am standing with three of the greatest handicappers in the game, and they didn't win, either. One of them even whiffed on Saturday. But hey, there is a live-money tournament tomorrow. "You playing?" asks one of my new friends. "We’ll sit together."

My flight wasn’t until midnight on Sunday. Why not? It was a good decision. I only got into the top 20, but the beauty of live-money events is that you are making real bets. $704 to the good, and now I sit writing this amidst a West Virginia winter storm, eager with anticipation for the next time I will be lucky enough to be in those rooms. All in all, it was a wonderful experience (but for the flight home...don’t ever take a redeye). I put faces with many names I know from the virtual tournament world and was heartened to know that several of them knew of me as well. It is a great little community we handicappers inhabit...well, those blues-types among us anyway. And I doubt if there is a better handicapping tournament to be found than the one that happens at The Orleans every February. I hope to see all of you there sometime.