Apparently, according to the pictures available, Coolmore bought a bridge.

Coolmore is quickly acquiring an immense amount of high quality bloodstock that shows brilliance at a younger age. First, Uncle Mo was brought to Ashford. This was quickly followed by Hansen. Last year, Magnier, et al, went out and bought a sizable interest in Shanghai Bobby.

Now they've bought an interest in Verrazano. It seems they've changed tactics to buying before the horse wins a graded stakes race. But with the pedigree he's got, it seems like a no brainer.

By Champion Southern Hemisphere sire More Than Ready, Verrazano only has two starts to his name. But his most recent, a 16 length romp in a mile Allowance Optional claiming race on the dirt at Gulfstream showed that as of today, his ceiling is sky high.

More Than Ready has a tremendous track record. He has sired three Breeders' Cup Champions and a number of outstanding runners. His continued performance in Australia is remarkable as he has had a top three finisher in the Golden Slipper 5 years in a row. He seems to get a lot of classic distance runners in Australia (1200 to 1500 meters), but has seen his best horses succeed at right around a mile on the turf and the dirt here in the States. (Or really a tad shorter on the dirt and a tad longer on the turf. I'm only looking at his top runners, so the actual distance indexes for his progeny are probably different).

Verrazano is out of Enchanted Rock, by Giant's Causeway. She is not a winner, but is impeccably bred as her dam, Chic Shirine is a winner of the G1-Ashland Stakes and is by Mr. Prospector. Perhaps most importantly, Enchanted Rock's other foal is El Padrino, winner of the G3-Risen Star and a very nice runner. He has just begun his comeback from a long layoff post-Derby, and ran on December 19th in a AOC at Gulfstream.

As you look through the female family, there are a number of very nice winners to include Queena (Champion older mare), Serra Lake (G1-Go For Wand), Soaring Empire (G3-Hal's Hope) Brahms (2x BC runner, good turf stakes winner), Cappuchino (sire in Canada, Ack Ack winner, good turf miler), and others as well.

But most importantly, Hungry Island is also from the female family. She deserves a closer look since she and Verrazano share the same second dam, Chic Shirine, and the same sire, More than Ready. Hungry Island is a really good graded stakes horse who has won the G2-Woodford Reserve Lake Placid Stakes and the G2-Churchill Distaff Turf Mile Stakes. Her lifetime winnings are over $540,000. A turf miler through and through, she has shown top class and was even my pick in the G1-Longines Just a Game Stakes on Belmont day (a race where Tapitsfly impressively wired the field and strung out her competitors behind her). She's a really nice runner with a solid pedigree. Her broodmare sire is A.P. Indy, so when looking at the quality of the pedigree between Verrazano and Hungry Island, all you are doing is replacing Giant's Causeway with A.P. Indy. That's trading one champion sire for another, so not really a loss in quality at all.

You really like to see the success of the female family be as far reaching as it is with Verazanno. You see successful runners when bred to Lyphard, AP Indy, More than Ready, Empire Maker, Capote, Mr. Prospector and others. That indicates that you have a very strong pedigree capable of producing some very live runners when crossed with any stallion.

I think you can expect Verrazano to continue to show extremely high class as he moves forward. But ultimately I think we will see him settle in to less than Classic distances and probably look to move to the turf post-Triple Crown. But no matter what, we certainly have not seen the last of him and his success.

Verrazano sold as a yearling in the 2011 Keeneland September Yearling Sale for $250,000. You can add in El Padrino to the progeny of Enchanted Rock. 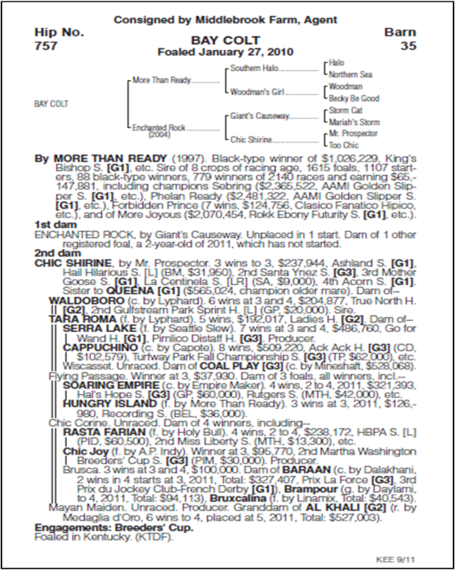