As a NASCAR neophyte (and auto racing in general), last weekend's race at Las Vegas was a chance to view a different kind of horsepower.

Share All sharing options for: NASCAR & Horse Racing: A Comparison of Horsepower

Prior to last weekend I had never in my life attend a major auto race in person. Many years ago I watched a practice session at the state fairgrounds for maybe 10 or 15 stock cars but that's a far cry from attending a full race weekend at a major motor speedway in the U.S.

I went into the weekend with very few preconceptions about what I was about to experience. I've watched NASCAR races on TV in the past, so it's not like I didn't know anything about the sport. But I had no clue as to what the live viewing experience entailed. Sure, I knew the cars would be loud, but I didn't have a frame of reference of any kind. And, sure, the cars are fast (much faster than the thoroughbred racing that I'm used to), but I how fast was something I couldn't comprehend.

What transpired over the three days in America's adult Disneyland, Las Vegas, was an education of a racing newbie and an experience that contextualized the difference and similarities between racing cars and horses.

If I had to pick out the most basic characteristic that differentiates a NASCAR race from a horse race it would be the fact that if you sit near the front row at at NASCAR race you end up covered in about a half a tire worth of rubber by the end of the three or four hour race. Every time a group of cars whizzed past me I had to make sure I protected the top of my beer lest I wanted to find little bits of black debris lining the rim of the can. It's also a good idea to eat your food underneath the grandstand or from a seat a bit farther back from the fence.

A pack of cars speed by the grandstand during the NASCAR Nationwide race at Las Vegas on March 9, 2013. Video: Matt Gardner

As a horse racing fan, it's a bit different mindset to sit down prepared to watch a race that will involve the participants going around the track 200 to 250 times in an afternoon. I'm used to a race concluding in something like 90 seconds. It took me a while to put the long term strategy in perspective but, more importantly, I was required to engage in a little more "long term" focus. Instead of 10 or 12 races to focus on (or perhaps 20 or 30 if you are playing a simulcast), you focus on one group of participants for the entire day. As "basic" as that sounds, and as much as I was already aware of that key difference prior to going to the races, I still found that to be a big hurdle to cross. Perhaps all of us horse racing fans have serious ADD?

A big plus for the NASCAR experience is the ability to get up close to the cars themselves following the race. We had what were called "Cold" passes which allowed us in to the garage area before and after the race. (If we had "Hot" passes, we could have been in the pits and the garage during the actual running of the race, which seems crazy). Following the races on both Saturday and Sunday, I was able to walk to within just a few feet of the cars while the crews prepared them to load onto the trailer for their journey to Tennessee for their next race. On Saturday, that involved getting right up close to the winning car (photo below) during its post race inspection from NASCAR. 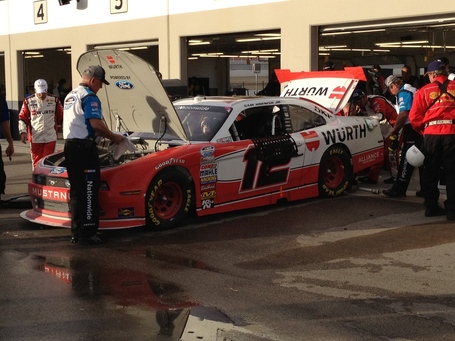 In a somewhat similar fashion, we can get close to the horses when at the track but there's always that buffer zone in the paddock or on the rail. I suppose the closest analogy is going to the barn area before or after a race, but I gather that's a much rarer occurrence for the casual horse racing fan than for the casual NASCAR fan.

Of course, the major difference in the horsepower vehicle for each sport, is that the horse is a living breathing animal with a personality. In many ways it makes perfect sense to limit the access of the general public to the animals themselves. A car, while no less an impressive piece of power, IS truly a machine. We talk about that a lot in horse racing: that the animals are flesh and blood, and not machines, which makes the analysis of 'what went right' or 'what went wrong' a little more complicated. You can pop the hood on a car and see if something is wrong inside. If a tire goes flat, you know. And while you can look inside a horse via X-rays and MRIs, it's certainly a different kind of challenge.

When I watched the pit crews take their wrenches to the cars all weekend long trying to fine turn their performance to the highest level possible, I thought of the trainer and their staff jogging and galloping the horse, preparing the feed and doing everything in their power to ensure a top performance.

As the races went on this past weekend, my mind drifted to a comparison of the humans involved - the drivers and the jockeys - both of which participate in an extremely dangerous endeavor of attempting to maintain control of these powerful entities. The driver zips around the track in speeds approaching 200 mph in a vehicle stripped to the bare bones of the amenities and comforts we experience every day. A massive engine powered by high performance fuel is the defining characteristic of the car, with the roll cage in place to protect the driver from serious injury.

By any standard, today's stock cars are probably the safest they've been during the history of the sport when you consider the power behind the vehicle, yet the driver is still engaging in an extremely dangerous activity just by getting behind the wheel.

The jockey makes his way around the track at a speed much slower than the car, usually in the 35 to 40 mph range, depending on the race. Yet his protection is limited to his small helmet and the flack jacket around his torso and he's got no roll cage to protect him if and when he's thrown from his mount. Nothing to protect him if he falls to the ground with a field of horses bearing down on him as he lies on the track.

As I thought about the drivers and the jockeys and the risks they take each and every time they get into a car or climb on top of a horse, I began to appreciate even more the mental state one has to have in order to succeed in both of those environments. If you're going to take a car three wide into a corner at 190 mph, you can't have fear nor a lack of confidence in the ability of your car or yourself.

The same is true for the jockey that attempts to squeeze his mount along the rail during a key moment of a race, knowing that at any time the hole could close with nowhere to go and little room for escape if things go wrong. There's no place for apprehension and second guessing; instinct, confidence and skill are required at all times.

So, my NASCAR initiation is complete, and with it comes a dime's worth of free advice for anyone seeking to experience their first auto race:

If you've never been to a NASCAR race (or any live auto race), I'd recommend you go at least once in your life just for the experience. And while I definitely prefer a day at the horses over pretty much anything else, I've never experienced anything quite like last weekend's races at Las Vegas Motor Speedway.

Oh, and those cars got some serious tires. 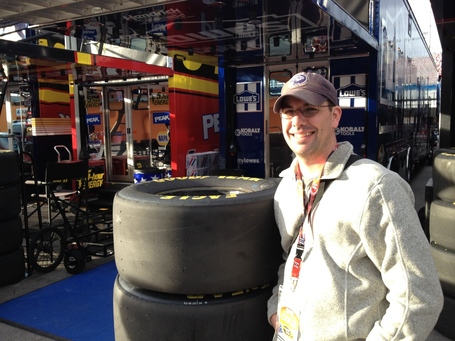