Of all of the stallions in North America, one currently stands above the rest: Tapit. He's made his mark to the point that there is speculation he could be in such demand that his stud fee could begin to approach the high end fees of the 1980s.

Originally, I wasn't going to do a profile on Tapit until after the Triple Crown was over, just to see if any of his sons ran away with one of the races. But in the past week, I've been seemingly bombarded with images and stories and opinions of the big grey horse. First, Sid Fernando was on Steve Byk's radio show on Sirius talking for forty-five minutes about Tapit and other influences in the pedigrees of the Triple Crown contenders. Next, I ended up having a giant discussion lamenting how we were going to take one of our mares to him his first season but then decided against it (a fact I completely forgot about until recently). Then this past week, there is a big article in the Wall Street Journal about Tapit. So go read this now.

Now that you've read the article, here we go.

Of every single sire currently standing in North America, there is none more sought after than Tapit. And while you can certainly debate the qualities of many of the other top sires in Lexington, argue whether they are worth the stud fee, and generally find reasons to not pony up $100,000 for a breeding (note: my reasons to not are easy in this regard: poverty) to do the same with Tapit is a waste of time. He's just that good.

When taking a hard look at him, there is one fact to consider: Tapit only just started getting the best mares around 2009-2010. This isn't a stallion, like say Frankel that all the best broodmares flocked to in his first few seasons. In this case, you cannot argue that Tapit's runners are a product of much other than his own genetics. When you are a lightly raced, albeit Grade 1 winning, stallion that stands for $15,000 and isn’t considered an elite prospect, you don't get the best. In fact, you don't get the best until you've gotten several crops of high quality runners.

Let's look at his year-by-year breakdown:

So really you’re looking at the first year that he was regarded as a top stallion was 2009. So that makes his first really great crop where he was bred to nothing but really good mares 3yos this year. We haven’t seen the best out of him yet. Just look at Hansen: You have to go back six (SIX!) generations to find any black-type in his female family. SIX! I have more black-type in my pedigree, I think. Hansen is 100% a product of Tapit and nothing else. That’s some powerful genes right there.

Tapit has some incredible sons and daughters:

And it’s still early for those 2009ers; they still have a lot of time to make their mark. He’s also got a mess of 3 year olds currently running in stakes races as well.

Traditionally, a new stallion will see a large number of quality mares, but in their second and third season, they drop off dramatically. So you don’t get a chance to see great crops from many sires (well, sires not named Frankel) after their first year until year 5 or so at stud based on the lag time from the first crop hitting the track, seeing the next few years enter the sales ring, and taking it all in to get one well informed opinion. For Tapit, it was the 2009 and 2010 breeding years that he really took off and was noticed as a superstar as a stallion.

With mares like Havre de Grace booked to Tapit, he not only has arrived, but he’s the best there is right now. Now as for speculation that he could demand stud fees approaching the $1 million that Northern Dancer commanded in the 1980s, well, that’s absurd. If Galileo can’t command that right now, no stallion will reach that any time soon. The market dynamics of the industry are structurally different than they were 30 years ago to the point that you simply could not ask that much unless every foal was guaranteed to be a stakes winner. And that’s just not possible.

So, he’s a great sire, he commands huge sums of money in order to breed to him, and I fully believe the best is yet to come with Tapit. 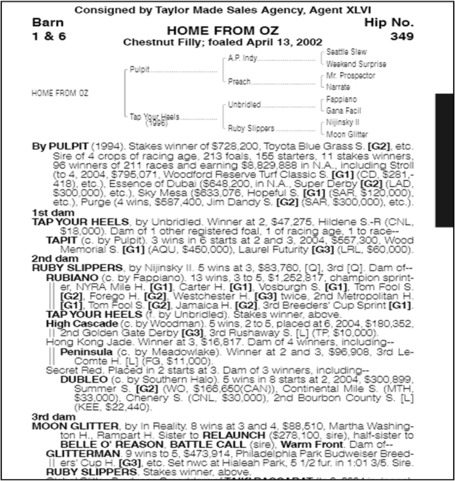