From the female family that produced the great Ruffian, Orb has shown himself to be one of the top contenders for the Kentucky Derby by making a nice run and winning the G2-Fountain of Youth and then absolutely dominating his peers in the Kentucky Derby presented by YUM! Brands

[Matt's Note: Tribe penned this back in early March after Orb won the Fountain of Youth and updated it today with some notes on the connections.]

When you see a horse owned and bred by Stuart S. Janney III & Phipps Stable, and you see the dam, the siblings, and nearly all of the family owned and bred by the same, you know you have stumbled upon something good. Between the two families, or in partnership of the two you find some of the great horses in history: Personal Ensign, Bold Ruler, Coronado's Quest, Ruffian, Easy Goer, Buckpasser, Air Support, My Flag, and a current horse of the year candidate in Point of Entry. Currently the two cousins, Stuart Janney and Ogden Phipps are the Vice Chairman and a member of the Jockey Club, respectively. The families' partnership with Claiborne farms has been a defining factor in the industry over the past 50 years.

However, over those several decades, not a single horse won the Kentucky Derby.

In a similar strain, Hall of Fame Trainer Shug McGaughey was never able to grab the Roses despite training all of the great horses listed above. In fact, when inducted to the Hall of Fame, Shug said, "I'd like to win a Derby" for the connections of Orb. The best thing about Shug is his careful approach insofar as not pressing any horse into a race they are not ready to win. Whereas D. Wayne Lukas basically started any horse he could in the Derby, and Pletcher and Baffert followed suit as their barns grew to their current size, Shug runs horses in races they can win. It's and old school, yet refreshing approach.

I really cannot imagine a more deserving set of connections that have worked so diligently over many years as have the Janneys, the Phipps, and Mr. McGaughey. I really am glad that they have a really live runner with a great chance at the Triple Crown. It's such a great story.

Bred on the emergent and productive A.P. Indy - Unbridled cross, Orb is as well bred as they come.

Orb has all of the makings of a classic distance horse that can carry his speed 10 furlongs with no issues. In fact, you see that in other GSW horses bred on this cross: Tapit, General Quarters, Stephenoatsee, Super Ninety Nine, and Unbridled Command, to name a few. There may not be a better pedigree to carry a classic distance over dirt than the AP Indy-Unbridled cross possible right now.

Orb, for a February foal, is a bit of a later developer. He did not break his maiden until November 24th of his Juvenile year. But he certainly has come into his own winning three in a row to include the G2-Fountain of Youth at Gulfstream, earning 50 Kentucky Derby Points in the process.

The pride of Spendthrift Farm, Malibu Moon is not a world beating stallion in the realm of his own sire, A.P. Indy. But he is as consistently good as you could find and you cannot realistically ask for anything more than that. He's struggled to get runners that can truly be categorized as great, and hasn't been able to get one to stick on the Derby Trail, yet. As as son of the venerable A.P. Indy, he does exactly what you'd expect: get runners who can make 8+ furlongs with no problem on dirt. Currently standing at B. Wayne Hughes' farm, Malibu Moon stands for $70,000 LFSN. But the best part of his story is that he's earned his place at the top of the stallion ranks:

Winner of a salty maiden special as a 2-year-old at Hollywood Park in 1999 and second in his only other start, Malibu Moon went to stud the following year as a 3-year-old in Maryland at the Pons family’s Country Life Farm.

But beauty is as beauty does in breeding, and over the past decade, Malibu Moon has exceeded all the hopes of Wayne Hughes, who raced him, and of the syndicate members and breeders who have supported him since he was transferred to Kentucky, where he now stands at Hughes’ Spendthrift Farm.

Malibu Moon moved to Kentucky because he got good horses from the beginning. Sire of a good horse in his first crop named Perfect Moon, winner of the Hollywood Juvenile Championship and Best Pal Stakes at 2, Malibu Moon sired a champion in his second: Grade 1 winner Declan’s Moon.

Orb is out of the Unbridled mare, Lady Liberty. Unbridled is a noted sire of sires, his best son at stud being Empire Maker, whom the Japanese are hoping is spectacular enough to become their successor to Sunday Silence. Additionally, Unbridled's Song, Eddington, Harlington, and Grindstone all stand at stud as well, with varying degrees of success. As a broodmare sire, Unbridled is a consistent top-10 to top-25 performer who can count Shackleford amongst his best horses foaled from one of his daughters.

Lady Liberty is a 4 time winner from 23 starts but was competitive (though unplaced) at the graded stakes level. She is one of those mares that is much better than her page would suggest in terms of talent and performance. Despite being born in 1999, she only has 4 foals, but that is due to racing through her 5 year old campaign. She only has one other foal of note, a gelding foaled in 2006 named Cause of Freedom. He is a very nice allowance horse that has won over $100,000.

His second dam is the winner of the 1996 G2-Black Eyed Susan. By Coxs Ridge, Mesabi Maiden was actually a bit disappointing as a broodmare, as her only significant runner is Lady Liberty. But she did have plenty of chances, with 8 foals and the pick of high-end stallions. But the family cools down until Orb popped into the picture.

Now the relevancy of this is basically zero in terms of genetic influence, but it is interesting that if you go all the way back to Orb's 5th dam, Shenanigans, you find that she is a broodmare of nearly unparalleled production. She had 6 foals, all winners, including one of the best race fillies horses of all time, Ruffian.

In 1974 and 1975 Ruffian was undefeated through her first 10 starts, with her wins including the NYRA filly Triple Crown consisting of the Acorn, Mother Goose, and CCA Oaks (not the more recognizable Triple Tiara KY Oaks-Black Eyed Susan-Acorn). Her injury in her match race between her and the 1975 Kentucky Derby winner Foolish Pleasure is one of the most heart wrenching stories in thoroughbred racing history. For a great piece on the impacts of Ruffian, Randy Mosswrote this up in the aftermath of Barbaro's breakdown.

Shenanigans also foaled Buckfinder, a useful sire, Icecapade, a G2 winner and sire of the first BC Classic winner Wild Again (who himself was a good sire), and Near East, a gelding who in his prime was a really nice allowance/low level stakes horse who won $200,000 in the early 1980s. Shenanigans died due to complications from colic and thus only had 6 foals one of which was by Bold Ruler, Laughter. Laughter's stakes winning daughter, Steel Maiden foaled Orb's second dam, Mesabi Maiden, who is detailed above.

The entire female family was/is owned by the Janneys and/or the Janneys-Phipps partnership in more recent years. It is extremely interesting how female families can cool off for a generation or two before heating back up again. While Mesabi Maiden and her dam Steel Maiden were stakes winners, there isn't much to brag about other than those two in the immediate family. But the Janneys and Phipps have a live on on their hands with Orb.

Below is the sales page for a mare out of Orb's dam's sister. You can really see how a dominant female family cooled off in a span of just two generations. 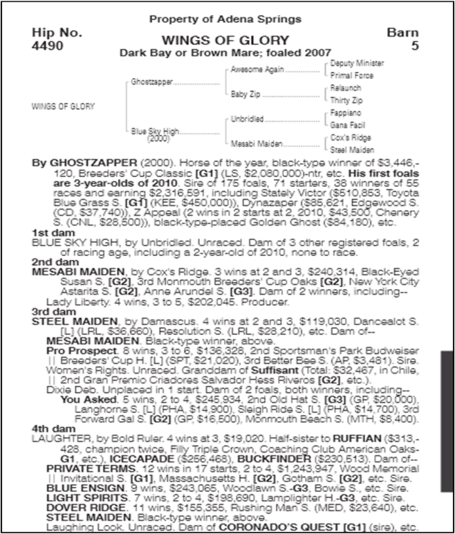