I Can Fix Churchill Downs (and Why They Wouldn't Let Me)

We have all seen the bad press, but why does CD and CDI keep shooting itself in the foot?

Share All sharing options for: I Can Fix Churchill Downs (and Why They Wouldn't Let Me)

Note by TFTribe: Admittedly, I wanted to be able to put more work into this article, as it isn't exactly 100% of what I envisioned it to be. That being said, with work having detoured recently into a series of completely unforeseen events, I will not be afforded the time to actually finish it. Oh, and as one addition, Churchill just announced that they were lowering purses for the September meet by 20%, so the takeout increase seems to actually have acted in contrast to their original purposes for raising it in the first place.

Despite the fact that Churchill Downs is the goose that laid the golden egg where racing is concerned, Churchill Downs Incorporated seems to care very little for the well-being of the track, it's partners, customers and the overall state of racing there. The amount of bad press recently concerning Churchill Downs proper has been astounding:

Each of these incidents represents a mere symptom of the larger disease. I am in no way condemning each and every employee of Churchill Downs or even of CDI, but instead the principles by which the track is being managed. President Kevin Flannery has essentially turned Churchill into a machine that is geared only towards maximizing profits and does that by focusing 100% of efforts on the Kentucky Derby.

CDI and therefore Churchill Downs only seems to care about maximizing profits and therefore minimizing expenses. That's completely fine. But at the same time, there is a sporting even that involves real, live animals,  humans, and dollars for which a certain quality of the track, grandstands, and customer service must be maintained.

But there is a fundamental misunderstanding of the relationship Churchill has with owners, trainers, fans, and players. Churchill seems to think that is the nexus of all racing activity and it controls the access, rights, and everything else that goes along with the races. But Churchill is merely a facility, one of many in fact. While the brick and mortar aspect of the track certainly does carry a significant amount of risk that is assumed by Churchill, it is the owners that truly put the event on.

Owners lose massive amounts of money each and every year. They deserve to be treated as partners in everything the track does and wishes to do. Customer service should be geared to ensuring that the owners feel like celebrities, that their business is wanted and appreciated, not like they are a given. Churchill is the most famous track in the country, and in fact one of the most famous in the world. Yet I would have better luck getting a free drink at Turfway park than I would at Churchill Downs.

With that said, I've developed some genius rudimentary charts to describe how I think things are and how they should be. 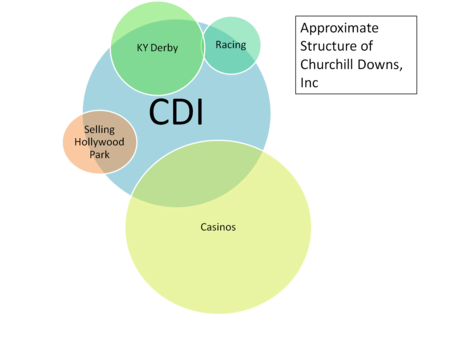 CDI is a publicly held company, so I have zero issue with their attempts to maximize profits and while maximizing their holdings of profitable companies. Casinos are easy money in comparison. Person enters casino; Person puts money into machine/onto table/into cashier's window; Person plays game with sub 50% chance of winning; Casino takes home money. Patrons of the casino are simply customers who are enjoying themselves by spending their money at games of chance. There is only one transaction that occurs in that patrons interact with the casino. This is not the case with racing. But the grand allure of the Kentucky Derby is more similar to the interactions of casino and patron that on any other day of racing. Great masses of humanity line up for the chance to throw money at Churchill. The Derby is the cash cow, the gift horse, the goose, if you will. It is the gift that keeps on giving and is in and of itself a major asset to the corporation. But racing seems to be a far more minor endeavor. The racino is what CDI wants, not the racetrack. 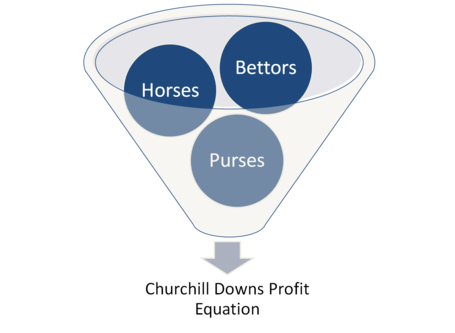 The linear relationship of patron-casino is not replicated when considering all of the parties on the track. While most times trainers are the proxies for their clients when it comes to relations with the track, it is still the owners that control the horse. But Churchill seems to view the horse as a given in their equation, taking for granted the other opportunities that exist throughout the Midwest during their meets. The relationship is clearly not linear as owners provide the horses to create the event, trainers prep the horses for races that suit their animals, bettors target large races and beneficial opportunities, and Churchill provides the facility and the purse (which is derived from their "tax" on the bettors. 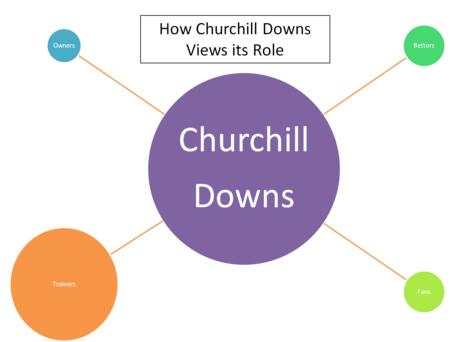 Churchill assumes that it is center of these relationships, that all activity revolves around it. With this attitude, Churchill cares little for those that support it, since, in economic terms, it views demand for its product and services as relatively inelastic when in fact it is truly about incentives, supply, and demand. Trainers get more say, races are tailored to individuals' desires in some cases. But since the track believes that people, owners, and bettors will always want to wager on Churchill's product, their own actions as the most important ones in the system above. In fact, Churchill has openly exhibited some of these tendencies with actions like raised takeout, chastising trainers for shipping to other tracks, and showing relatively little regard to owners in relation to other tracks. 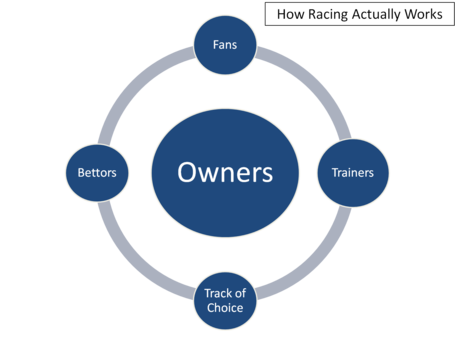 But this is how the system should be viewed. Tracks are essentially competing for horses as larger fields mean more interest from bettors which yields larger handle for the track. Larger handle leads to more owners/trainers interested in racing for said purses and exciting, full races mean more fans at the track. Owners are not purely customers of the track, but instead are the integral part of the entire system. Churchill is one of many facilities in which I can compete as an owner, and I must make the best decision for my horse to enter any given race. Just look at Keeneland and Saratoga. Owners love those places and thus fields are full, races are exciting, handle is large, attendance is high, and everyone is happy.

I am not trying to demonstrate that owners are the most important aspect, but simply that by focusing on owners and their horses, you can increase field sizes and attract more bettors. Ownership is both a joy and an enormous pain. That is why it is difficult to attract new ownership since you basically admit from day one that you intend to lose money, and perhaps in large quantities. But by making the prospects of ownership more attractive by focusing on their efforts, you can (hopefully) increase both the number of owners that wish to compete at  your track AND increase the number of owners overall. That may be a stretch but at some level it must be true.

While the Kentucky Derby is far and away the most valuable property in Western Hemisphere racing, there its far more to consider when operating Churchill Downs. I am not advocating for giving the house away to all of the owners, that would be counterproductive. But what is definitely needed is a flexible approach to fixing Churchill:

So the question is, will CDI ultimately have Churchill run one weekend a year? I don't think they would be that disappointed if that were the case.