Can the Queen Anne winner get the pace he needs and the trip he wants? Will he even like the dirt?

Share All sharing options for: Pedigree Profile: Declaration of War

And as is the question with Santa Anita, will the surface even allow Declaration of War to close into the pace?

When perusing the Classic's Past Performances one of the field really stands out. With zero starts on conventional dirt, one on All Weather in England, and the rest on grass, you really have to question the tactic of placing Declaration of War here by Aiden O'Brien. But then again, questioning perhaps the best trainer in the world is probably a mistake. But he is a two-time Group 1 winner (the Queen Anne at 1m and the Juddmonte International at 1m 3/16ths) and Group 3 winner on the All Weather at Dundalk at 10.5 furlongs so he is not only of the class necessary, but he is of the highest class in the world.

Having been trained in Europe from the get go, Declaration of War has never really seen a dirt track before. He has no recorded works stateside and I cannot find if he has shipped in yet.

But his race record aside, Declaration is thoroughly American. Owned and campaigned by the Coolmore syndicate, Declaration of War has shown he is undoubtedly a top class miler. However, that does not mean he cannot get the 10 furlongs of the Classic. Ascot is uphill, as Animal Kingdom experienced in the G1-Queen Anne Stakes. Animal Kingdom, who proved himself on every surface and nearly every distance, was no match for Declaration of War that day at Royal Ascot when AK finished a distant 7th while Declaration of War ran away with the race over a Good turf. AK is one of the best and most powerful (albeit fragile) horses in the past few years, so that victory does nothing but credit Declaration of War's form.

By maybe the hottest sire in the world in War Front, Declaration of War is immediately set up for success in the States. With progeny winning over turf, dirt, and synthetics, no matter where in the world, the condition of the track, or the level of competition, you can't go wrong with War Front. When his stud fee was raised a few weeks ago from $80,000 to $150,000 I wasn't surprised. He's probably worth every penny and with his progeny's successes in Europe, the Euro breeders are probably knocking down Claiborne's door right now. I've been meaning to get to a profile of War Front (spoiler: he's really ugly), but I think for now it will suffice to say that the big guns standing right now in Lexington are Medaglia d'Oro, Bernardini, Tapit, Giant's Causeway, and War Front. The most remarkable thing about War Front, and I said much the same about Tapit, is that his runners right now are from crops before he was getting the best broodmares, so his successes will do nothing but become more frequent.

Out of the Rahy mare Tempo West, he is by far her best foal. Her next best is the nice stakes horse by Dynaformer, Vertiformer. The Rahy influence clearly shows in that her progeny not only see their best successes on the grass, but on some softer going, as evidenced by the ownership being willing to run in Europe and specifically France. But Rahy's best, minus one (we'll get to that one in a second), all saw their best successes on the turf. But not just American grass. He's gotten stakes winners in England, France, Dubai, and especially Japan (where they seemed to see out his runners) and including a World Horse of the Year in Fantastic Light. But the one great dirt lover of his progeny is the indomitable Serena's Song. While clearly a once in a generation talent, she relished the dirt and dominated her competition. If Declaration of War gets even 1% of that preference, he'll be just fine. 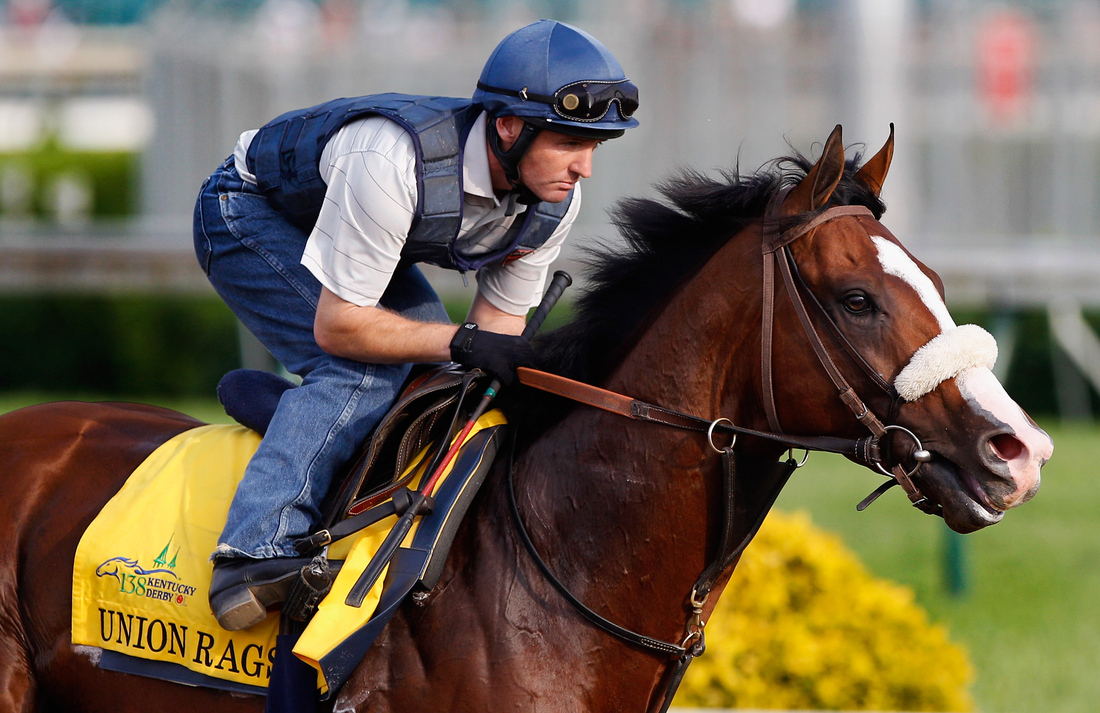 This colt exemplifies all of the traits his sire's get normally expresses: large, precocious, and attractive. But one thing sets him apart from a normal Dixie Union colt: G1 wins. (Photo: Rob Carr/Getty Images Sport)

But most interestingly, Declaration of War's second dam is Tempo. Tempo is from a long line of DuPont owned mares, which in and of itself is a great sign. But she also produced Belmont winner Union Rags. Belmont winners tend to make solid sires, indicating a solid genetic make up. Now while drawing a conclusion about a Classic runner from his 1/4 relative may be a stretch, the strength of the female family is the true indicator here. With Rahy's champion sire pedigree and a family of stakes producers, he is set up for success on the dirt.

So in summary Declaration of War has a truly American pedigree which is coupled with a strong turf influence but also an ability to get a truly top class dirt horse. Distance will not be an issue in the Classic and in fact will probably be a strength since 1m in Europe probably runs a bit close to 9.5 furlongs. So even if 1m 2.5f isn't his best distance on the lawn, 10 panels will be ok for him on the dirt.

Honestly, I actually like his chances at first glance. Giant's Causeway almost got home in a similar position. I definitely see Declaration of War closing hard (and at a nice price) into a fast pace contested by Moreno, Game On Dude, and Fort Larned. But the great nullifier could be the track itself. It will require a great deal of attention on Friday to ensure the track isn't carrying speed to the line like it did last year.

More from And Down The Stretch They Come: