Midnight Hawk, winner of the Sham Stakes in early January, leads the field in the Grade 2 Robert Lewis Stakes at Santa Anita on Saturday, February 8th.

There are certain sires that I really like to see in the pedigrees of horses when I'm looking thought the form. Not necessarily because they lead me to a specific bet or selection, but just due to the fact that I like to see what kinds of horses these sires are producing on a consistent basis. Two of my favorites to take a look at are Candy Ride (ARG) and Ken & Sarah Ramsey's pride and "joy", Kitten's Joy. A couple of others that usually catch my interest are War Front and Midnight Lute, with my eyes opening to Midnight :Lute's stallion possibilities through one of Tribe's excellent pedigree pieces. 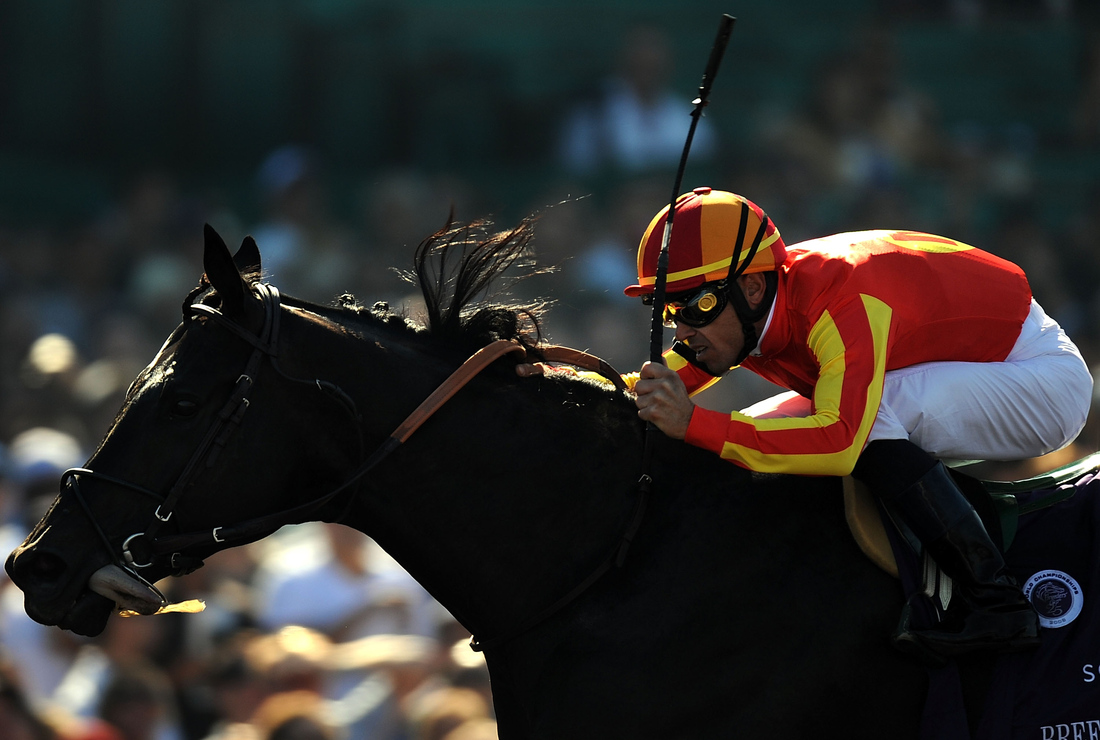 Typically, big time sires will have one, maybe two top end runners in any given year on the Road to the Roses. Maybe they're lucky and have a filly that's gunning for the Oaks. If your first crop is doing that, you're unbelievable. And Midnight Lute, with his first crop turning three in 2013, has done just that: He's got two Derby starters and a serious contender in the Kentucky Oaks.

In today's Grade 2 Robert Lewis Stakes at Santa Anita, we have a field of three-year-old colts littered with the names of sires that I love to watch. Led by Midnight Hawk, a son of Midnight Lute, the field (and their pedigree) breaks down like this:

Candy Boy broke his maiden on the Hollywood Park synthetic surface but he ran well in his lone dirt start at Santa Anita, finishing second of ten in his third career start. I've been a fan of Candy Ride offspring generally due to the the surface versatility of many of his sons and daughters. While some sires see winners on either dirt or turf or synthetic, Candy Ride has produced top class winner on all three. With California at this point very split up between synthetics, dirt and the green stuff, I love to see runners sired by horses that can get good winners on a variety of surfaces.

Diamond Bachelor's lone dirt start in the Breeders' Cup Juvenile was pretty much a disaster and really makes you wonder if this guy just doesn't care for the main track. They'll give him another shot today but, barring a big turnaround, I feel like he's destined to find himself back on the lawn in the near future.

Midnight Hawk draws morning line favorite stats off of a a nice win in the Sham back on Jan. 11th after a really nice maiden score at Hollywood in early December. He's got some speed to his outside which might bring him under some early pressure, but if he can build off that Sham score he'll be tough to beat.

Home Run Kitten has raced twice on the lawn, breaking his maiden in his most recent start at Santa Anita, and not tries the main track for the first time. We'll see how his form translates to the dirt but I think he not only needs to maintain his turf form on the surface switch, but he'll have to take a couple steps forward.

Cool Samurai: This guy likes to come from quite far back with a strong, late run. I'm not sure that's going to be a winning combination at Santa Anita in a race like this but perhaps this gelding is one to keep tabs on if they can pick out the right spots for him.

El Nino Terrible: Broke his maiden at Santa Anita at this same distance; like a lot of colts this time of year, I really don't know what to expect from a horse like this until he actually starts to run against better and better company.

Chitu: Undefeated in two starts which came over synthetics and dirt, and he's displayed good gate speed in both of those races. I assume that jockey Martin Garcia will once again hustle Chitu out of the gate because there is not way he should let Midnight Hawk control this race in the early stages.

It's really hard to get away from Midnight Hawk in this race when you look at how the pace appears to break out. We've got a trio of horses that really like to get up near the lead - Midnight Hawk, El Nino Terrible and Chitu - and then horses that have come from well back on dirt or are turf horses. I think Chitu and Garcia need to make sure Midnight Hawk doesn't get things easy early, and I'm guessing El Nino Terrible and Maldanado will try to avoid getting squeezed back behind those two.

Perhaps things could get a bit out of control on the front end in the Lewis; Diamond Bachelor displayed a lot of speed on the lawn in his first three starts but not a lick of early interest in the BC Juvenile. I kind of doubt we'll see him get into the mix in this race given Leparoux in the irons, but you never know.

If Candy Boy and Stevens can sit fourth for the first six furlongs, maybe three to four lengths off the opening trio, he should have an excellent opportunity to run down the leaders in the stretch. If the tote action leans more towards the favorite, perhaps Candy Boy can be had at something like 5/2. I don't expect that to occur, but I can hope!

Below are the entries, post positions and morning line odds for today's Robert B. Lewis Stakes at Santa Anita: