A close second in the G1-Blue Grass plus an insane opening half-mile in the Derby apparently equals a win in the G1-Belmont for Palace Malice. As the first Classic winning son of two-time Champion handicap horse Curlin (and from his first crop, no less), Palace Malice has quite the mantle to carry forward throughout the rest of his three year old campaign.

After surging to the front of the Belmont field as they entered the stretch, Palace Malice seized the first Triple Crown victory for Cot Campbell and Dogwood Stables in over 20 years. Despite the three different winners of this year's Triple Crown races, the three share a distinct connection: history. Not history in the sense that their wins were necessarily historical. But history in the sense that the connections of Orb, Oxbow, and Palace Malice are made up of some of the most historic names in racing's long legacy.

So what do we make of Palace Malice? Did he just get lucky and allow a speed-favoring track carry him to victory? Or is there something in his pedigree that points to the fact that he should like the distance? After his ridiculous opening half-mile in the Derby, it seemed all was lost. But really when you look at him closer, you see a horse that went out at an absolute dead sprint, toasted every speed horse in the race, completely strung out the field, and singlehandedly forced a pace meltdown yet still managed to finish 12th of 19 starters. While that line normally would not attract a second look from most handicappers (admittedly that sample includes me) you have to admire the pure willpower and stamina that it takes from a horse to hold on and not drop completely out of the back of the field after basically bolting. But in retrospect, that effort seemingly betrayed a love of the extra distance that the Belmont Stakes provided for him.

Palace Malice, by Curlin out of Palace Rumor (Royal Anthem)

Curlin's first crop are three year olds this year, so there really isn't a lot to cover with him other than his race record, which is extremely familiar to most. Since a large portion of his progeny's starts are as two year olds that typically race at sprint distances, it is difficult to truly extrapolate what kind of foal he tends to get. However, Smart Strike is easier to get a picture of, with terrific runners like English Channel, My Miss Aurelia, Lookin at Lucky, and Curlin himself, it is easy to see that Curlin's get will love the classic distances. And being out of a Deputy Minister mare, it certainly only enhances that tendency. But Palace Malice is really the only significant winner that Curlin has gotten so far. That's not a knock necessarily, since Curlin only got better with age you can expect his offspring to show a similar tendency, but it definitely does mean it should not have been a surprise to see Palace Malice continue to develop as he got older.

Palace Malice is out of the Royal Anthem mare Palace Rumor. Palace Rumor has an extremely interesting back story, albeit only tangentially related to actual racing. From Mary Cage over at Past the Grandstand:

Palace Rumor was trained by small-time trainer Burl McBride, who sent the daughter of Royal Anthem to Hal Wiggins' barn at Churchill Downs for a start beneath the twin spires in 2005 while the remainder of his small stable remained at Ellis Park. Although he planned to send Palace Rumor - two years old at the time - back to Ellis Park after her race, he decided to keep her overnight at Churchill following a taxing effort.

Early the next morning, a tornado ripped through Ellis Park, killing three of the seven horses McBride had stabled there. Palace Rumor - who, by the intervention of fate, had remained safe at Churchill Downs - was the only horse he had left. She would go on to be a black-type winner, accumulating career earnings of $271,135 before being sold for $140,000 to William S. Farish of Lane's End Farm at the 2008 Keeneland January Horses of All Ages Sale while in foal to Tiznow.

Her sole stakes victory is the Audobon Oaks at 8.5 furlongs on the grass at Prairie Meadows Ellis Park. She has had three foals. Her first two were fillies by Tiznow and Elusive Quality. The former is in Russia and sold as a yearling for $9,000 while the latter is a claimer with earnings just shy of $50,000 who also sold as a yearling but for $17,000. Palace Malice is her most recent foal and clearly her most successful. He was a clear step up in quality from the outset, as he sold in the 2011 Keeneland September Sale for $25,000 and again as a 2 year old in training at Keeneland in 2012 for $200,000.

Palace Malice's second dam is Whisperifyoudare, a mare by Red Ransom out of a Skywalker mare Stellar Affair. While not much of a runner herself, she has produced two juvenile listed stakes winners: Palace Rumor and her half brother, Maya's Storm. Maya's Storm was by any measure a fast colt, clocking a high of a 106 Equibase figure over 6f. In total, he won $268,988 from a race record of 11-4-3-4, including 4 listed stakes wins and sold at the Keeneland September Sale in 2010 for $110,000. His brother, Jumpifyoudare, also won over $100,000 and is a listed black-type winner. All three winners were all at their best at sprint distances. Also of note is her 2007 Exchange Rate colt, Revitilization. He, while not a winner on the track, sold twice for six figures: first in the Keeneland January 2008 sale for $125,000 and subsequently at the Keeneland September 2008 sale for $140,000. He may not be much of a runner, but he certainly must have been a looker with some nice conformation.

The best runner in the entire female family is a gelding out of a half sister to Whisperifyoudare, Save the Trip (Carson City) named Rail Trip. A winner of 9 races from 23 starts for a total of over $1.5 million, Rail Trip is one of the top handicap horses in North America, as evidenced by his 2nd place finish in the 2012 G1-Breeders' Cup Dirt Mile. He seems to be able to carry himself a little bit farther over synthetic than dirt as he is successful out to 9f at Hollywood and Del Mar. Just as importantly as anything else though is the fact that he really didn't make an impact until 6 months into his four year old campaign. He is currently working up a storm in Southern California preparing for his comeback, which I assume will be at Del Mar.

Taking account of the female family, you see a lot of very good runners and one great one. But all share a trait of coming up a bit short of the true classic distances. So how do you stretch out a family to 10 furlongs? Well, carefully for sure. But if any sire can do it, a sire like Royal Anthem can.

As the Broodmare sire, Royal Anthem seems to have predisposed Palace Rumor to liking a bit more ground than her cousins, which showed in her best form at a mile and a sixteenth. Currently standing in Ireland as a dual purpose (flats and jumps) sire, he has certainly fallen from favor with breeders in the thoroughbred arena. However, as a horse at his best at 12 furlongs and one that clearly gets good steeplechasers that want 2 miles to run, there is no doubt that he has infused some of his genetic stamina into his offspring in this case. Crossed with Smart Strike's son, you clearly see an attempt to take a nice sprinting family and really stretch it out. Additionally, you can look at Curlin as a bit of a late bloomer, which is a great cross with a family that seemed to get good juveniles. So in two generations, you've both stretched them out and instilled some slower-developing genes. An excellent, excellent job by Palace Malice's breeder, W. S. Farish, which is really no surprise. 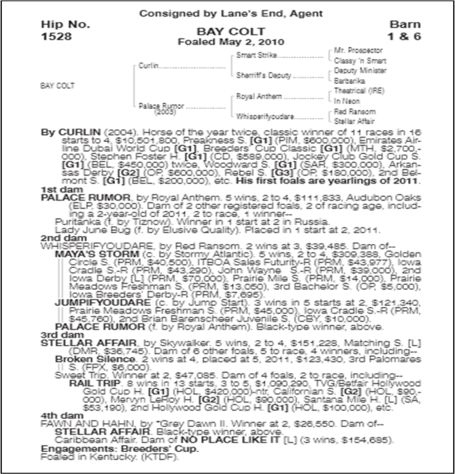