California Chrome looks to secure the second leg of the 2014 Triple Crown in the Preakness.

It's time to get your Preak on!

A preview of Saturday's 139th running of the Preakness.

As expected, Kentucky Derby winner California Chrome is the odds-on morning line favorite to win the 2014 Preakness Stakes at Pimlico this Saturday and will break from post position number three. (Post time: 6:18 p.m. Eastern; TV: NBC) Social Inclusion, third in the Wood Memorial in his most recent start and the winner of a pair of non-stakes races at Gulfstream Park this winter, is the second choice on the morning line at odds of 5/1. Ride On Curlin, seventh in the Derby after spotting the field 18 lenghts at the start, and Bob Baffert's Bayern, are the co-third choices on the morning line at odds of 10/1.

California Chrome comes into the Preakness looking as strong as any recent winner of the Derby. Not only is the Art Sherman trainee on a phenomenal run of form with five straight victories at distances ranging from seven furlongs to the mile and a quarter Derby, but the race this Saturday looks like the perfect set-up for this colt to nab the second leg of the Triple Crown. While early speed horses like Social Inclusion and Bayern are positioned to the outside of California Chrome in the starting gate, the Derby winner has displayed such a wonderful ability to utilize his high cruising speed to put himself into good positions early in the race that should serve him well at Pimlico. Additionally, depending on how much weight you put into various pace figures, California Chrome has sat near races with a fast pace, and ones where the early splits were much more forgiving, and dominated each time.

But, of course, this is horse racing and the Triple Crown: nothing is easy and nothing is a sure thing. And the question the rest of this Preakness field will ask California Chrome on Saturday is the same one asked of every Derby winner after just two weeks of rest: is this colt ready to produce another big effort at Old Hill Top? At this point, and after his string of excellent results, it's hard to bet against the Derby winner. 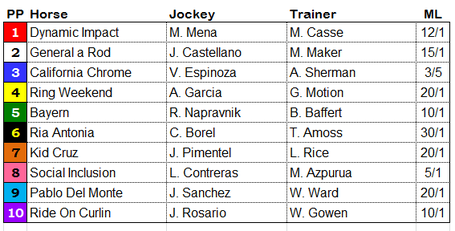 More From And Down The Stretch They Come