It's the 2012 Epsom Derby winner versus the 2011 Japanese Triple Crown champion in the 2012 Prix de l'Arc de Triomphe.

The Prix de l'Arc de Triomphe isn't just the biggest race in Europe, it's one of the most important races in thoroughbred racing anywhere in the world. First run in 1920, the Arc is a mile and a half race over the famed Longchamp Racecourse in Paris and typically features a large and competitive field of the best colts and fillies in Europe, as well as top horses from Japan. Horse trained in France and England/Ireland have dominated the Arc during it's history, winning 82 of the previous 90 editions of the race. An American-trained horse has never won the Arc.

Three of the major contenders for this year's Arc were ruled out of action over the past week. First, the five-year-old mare Snow Fairy (IRE) came out of a work with heat in one of her forelegs and was relegated to the sidelines. She'll be on the shelf for several weeks, which will also knock her out of any possible Breeders' Cup run. Snow Fairy is a winner of three-straight Group 1 races including the Queen Elizabeth II Cup in Kyoto, Japan, the Prix Jean Romanet at Deauville (France) and the Irish Champion Stakes at Leopardstown (Ireland).

Things went from bad to worse after the Snow Fairy news as word came out of Germany that the defending Arc champion, Danedream (GER), was in quarantine at Cologne Racecourse due to a case of a "Swamp Fever" discovered in another horse on the ground. The quarantine is expected to last at least a month, if not more, preventing the brilliant mare from traveling to France.

And finally, just a day following Danedream's defection, two-time Group 1 winner Nathaniel (IRE) spiked a fever and was ruled out of action by trainer John Gosden.

With three of the top contenders knocked out of the race, Camelot (GB) and Orfevre (JPN) moved to the top of the UK betting markets and should remain there until post time on Sunday. Orfevre is the 2011 Japanese Triple Crown winner, the sixth horse to accomplish that feat since 1941. Trainer Yasutoshi Ikee shipped Orfevre to France this summer in order to acclimate the colt to French racing prior to the Arc. He ran in the Group 2 Prix Foy at Longchamp (traditionally a key Arc prep race) and beat Meandre (FR) by a length.

Orfevre is guaranteed to take significant betting action from the legions of Japanese fans that are expected to make the trip to Paris for the Arc.

Camelot narrowly missed becoming the first English Triple Crown winner in over 40 years when he finished second to Encke in the G1-St. Leger Stakes at Doncaster on Sept 15. He won the G1-2000 Guineas in May, the G1-Epsom Derby in June and will have three-time Arc winning jockey Frankie Dettori in the irons on Sunday.

The defections of Snow Fairy, Danedream and Nathaniel diminished the stature of this year's field but not the importance of the race itself. The Arc, with a purse of €4,000,000 (about $5.1 million) is the race in Europe and on and exceptionally testing one, at that.

Like many of the racecourses in Europe, Longchamp is a challenging and stamina testing course, especially at the classic distance of a mile and a half. Below is a diagram of the Longchamp course, along with a description of the Arc trip. 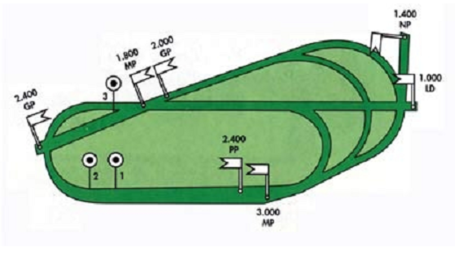 The Arc begins at the far left starting position for races at 2,400 meters, with the field running approximately the first furlong on the flat, then proceeding uphill until reaching about the midway point on the long turn at the far right portion of the course. From there, the field will descend slightly as they run into the "false stretch" before facing another slight rise in elevation as they enter the final furlongs.

The run to the top of the turn is quite testing and, as a result, the pace is usually very, very slow during this portion of the race. As you watch races from Longchamp that begin in this part of the course, you can see the considerable elevation gain from the gate to the top of the turn.

The Prix de l'Arc de Triomphe is a weight-for-age/sex race and the weight differences can be quite severe, especially for older horses. The official weights are (of course) in the metric kilograms, but (thankfully) not stone. Using the power of the Internet in order to assist this non-metric American, I've calculated the Arc weights in pounds.

As the chart illustrates, three-year-olds receive an 8-10 pound allowance over older males (depending on sex) and a 4-7 pound weight break over older females. While there is plenty of debate over the difference of a pound or two during the running of a race, 8-10 pounds is a significant difference in a race as grueling as the Arc.

Recent Arc history suggests the weight allowances by age and sex can't be overlooked when handicapping the race. Females, especially three-year-old females, receive significant concessions from their rivals and top class thee-year-old fillies, in a race as testing as the Arc, are at a distinct advantage by carrying less weight. As a result, any high-class three-year-old filly -- a label that directly applies to Great Heavens (GB) -- must be taken seriously in the Arc.

Great Heavens, a full-sister to Nathaniel, has won four consecutive races, including the G1-Irish Oaks and G2-Lancashire Oaks. She's been exceptional at the distance of a mile and a half and she's run well over soft ground her entire career. Great Heavens won the Lancashire Oaks by taking the lead after the starting gate and controlling the race for the next 12 furlongs. She won the Irish Oaks by sitting several lengths behind the early pace and making the winning move inside the final furlong.

With several trainers entering rabbits in this race (pacesetters), Great Heavens won't want to be up on the lead for the entire trip. But if she's able to settle into a good position near the front of the main pack, she should have every chance to make a dash for the finishing post in the last quarter mile.

Camelot will also receive a weight allowance due to the fact that he's a three-year-old, although he'll still carry a little over three pounds more than Great Heavens. The ground at Longchamp shouldn't be a problem for the Derby winner as he's been victorious over ground ranging from Good-to-Firm to Soft/Heavy in his short career.

Masterstroke is another mid-priced horse that makes a lot of sense in the Arc. He's a three-year-old, so he'll get some weight from his older rivals and he's being offered at decent odds by the UK bookmakers -- anywhere from 7/1 to 10/1. And perhaps most importantly, he's in excellent form after a couple of decent wins over the summer at Deauville and Vichy. He's never faced a field as talented or as deep as this year's Arc, so we don't want to take a short price in any situation, but if he's around 10/1 or better on the tote as we near post time he might make sense in an exacta situation.

I'll play Great Heavens to win and above and below Camelot or Orfevre (depending on the will-pays) in an exacta. If the price is right, I'll toss Masterstroke into the mix.