An American-bred and trained horse might never have a better opportunity for success at Royal Ascot than Kentucky Derby winner Animal Kingdom. 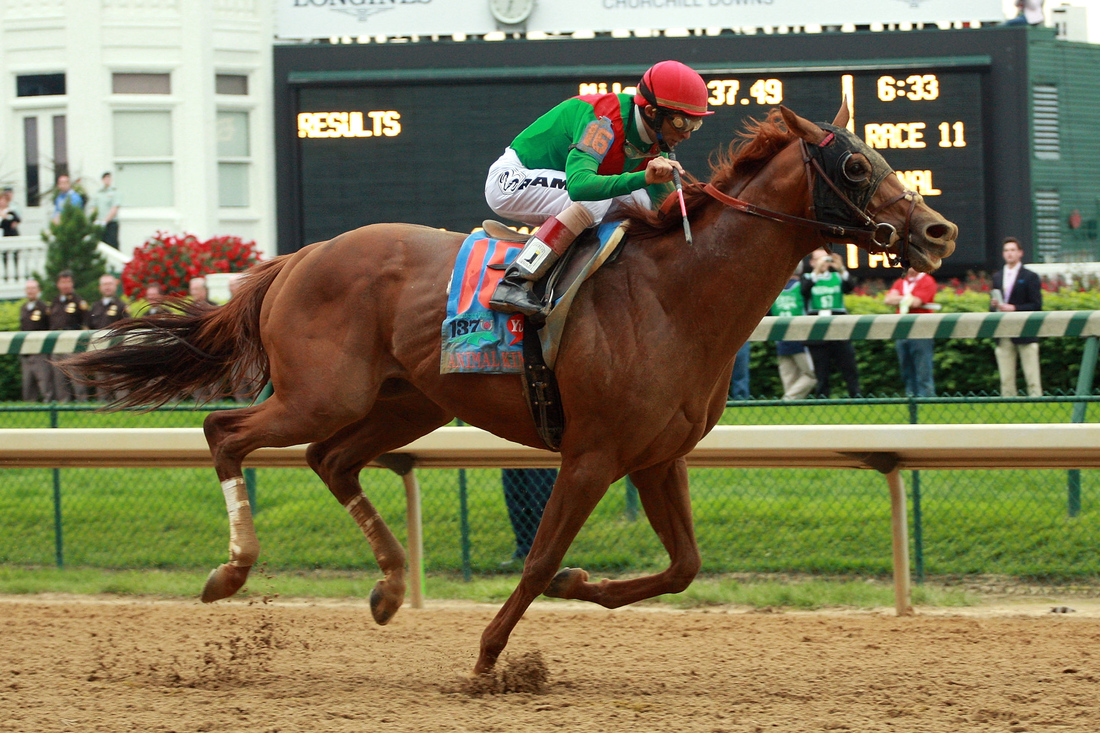 On the whole, American race fans don't claim to be regular-watchers of the goings on in England or abroad. However, Royal Ascot is a great cure for that Triple Crown hangover. It might be the greatest spectacle in international racing, and features quite a number of American invaders. Here's your American-centric guide to Royal Ascot Tuesday, showing you when the races are run and which American product you can root for. (Photo by Travis Lindquist/Getty Images)

2011 Kentucky Derby winner Animal Kingdom will attempt to cap his career with a rare victory by an American-trained horse in the Group 1 Queen Anne Stakes on the opening day of the 2013 Royal Ascot meeting in England. (Post time 9:30am ET; TV: TVG) Run for the first time in 1840, the Queen Anne features a long list of distinguished winners, including the last three to triumph at Ascot: Frankel (GB), Canford Cliffs (IRE) and Goldikova (IRE).

The connections of Animal Kingdom couldn't have asked for a better situation for their horses to succeed in a race where few American horses have even attempted. A spell of dry weather in England has left Ascot with ground currently rated as "Good". The "Going Stick" rates the various parts of the course in the following manner:

The GoingStick rates the ground at a particular course based on a scale ranging from 1 (Heavy) to 15 (Hard). The current ratings at Ascot suggest a course right in the middle of the spectrum, which I think is probably as good as an American horse can hope for when traveling to England to compete. While I think Animal Kingdom would fare well over soft ground, his best chance for success is a firmer, faster surface where he can unleash his strong and quick turn of foot. And while Animal Kingdom possesses a good deal of stamina, a "Good to Soft" or "Soft" course would have tested the Derby and World Cup winner in a manner he's never encountered. Fortunately, it appears the ground will not be a hindrance to success.

Aside from the condition of the grass as Ascot on Tuesday morning, the nature of the field Animal Kingdom will face in the opening race also provides an opportunity for a top finish. Unlike the last three years version of the Queen Anne, there are no monster milers in the field. In fact, take a look at the top victory in the career of each of Animal Kingdom's rivals in the Queen Anne:

Elusive Kate is the only Group 1 winner in the field other than Animal Kingdom, and several of the horses in this field have yet to win any race at the Group level. Simply put, Animal Kingdom has a severe class advantage over the overwhelming majority of this field. The two rivals that I think will present the stiffest challenge to the Derby winner are the aforementioned Elusive Kate and Sandown Mile winner Trumpet Major (IRE).

Twice in her career Elusive Kate has taken on the boys, and twice she's run credible races. In the Group 2 Queen Elizabeth II Stakes at Ascot on 2012 British Champions Day, Elusive Kate finished third behind Excelebration and Cityscape, and at Deauville last summer she finished third behind the same two horses in a Group 1 race. So, overall, this filly can put in a top effort against her male rivals. Elusive Kate possesses a good deal of early speed and will likely prompt the proceedings as soon as the gate opens.

Trumpet Major is a multiple group winner with wins in the G3-Rsa Thoroughbred Stakes, G3-Craven Stakes and G2-Champagne Stakes prior to his score in this year's Sandown Mile. He's thrown in a couple of major clunkers in his last three races and I think it's debatable as to whether he's a Group 1 talent.

Animal Kingdom will break from post position 13 in the Queen Anne, a spot that should allow Johnny V. to get a good read on the pace and the early tactics of the other horses. Straight mile races tend to see the field split to either side of the course (with the majority of the field attempting to race on whatever side is deemed the best path); Velazquez will need to put Animal Kingdom into good position early on in order to give his mount a nice, clean trip.

If you've never watched a race from Royal Ascot in the past (or races from Europe), the course layout and conditions will strike you as significantly different from those here in North America (unless you hand out at Kentucky Downs on a regular basis). Below is an overview of the course at Ascot from last year's Royal Ascot preview:

Like many of the courses in Europe, Ascot has its own unique configuration and characteristics, most of which play an important role as to how race are run and won. Below is a satellite shot (via GoogleEarth) of Ascot Racecourse. (The finish line is in the lower left portion of the picture.) 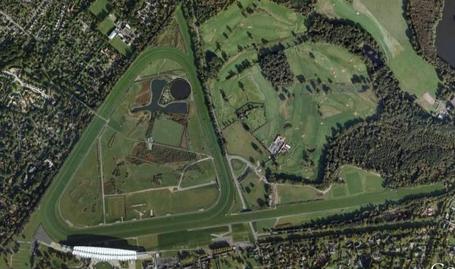 Notice the subtle differences in the parts of the course a horse has to navigate based on starting position. Races at 7 furlongs or less are run on the straight and begin uphill, then proceed downhill, then back uphill to the finish line. Races at a mile can begin at two different locations: at the lowest point of the course, "Swinley Bottom" (the top portion of the triangle in the satellite picture above), which requires the field to take a right hand turn towards the finish line; or at the far end of the straight, which requires horses to run downhill, uphill, downhill, and then uphill to the wire.* The Queen Anne Stakes, featuring Animal Kingdom, will run on a straight mile. The St. James's Palace Stakes will run on the round.

*Races contested at a mile and a quarter begin with a slight downhill run to Swinley Bottom and then require a long, uphill run towards the home straight. The testing nature of races at 10f at Ascot is one of the reasons the connections of Animal Kingdom opted for the straight mile of the Queen Anne as opposed to a mile and a quarter Prince of Wales's Stakes on Wednesday.

To get a sense of how the course looks for races run on the straight, here is a photo I snapped while visiting Ascot in April of 2011. (click on the photo for a larger image.) 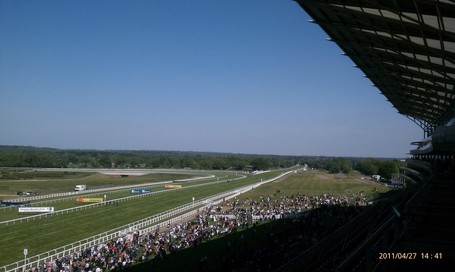 As you can somewhat see from the picture, there is a significant rise and fall through the straight course, and then a fairly steady climb to towards the wire. The starting gate is positioned in the middle of the course for races on the straight and the field will generally gravitate towards one side or the other, depending on which part of the course the jockeys believe is the fastest.